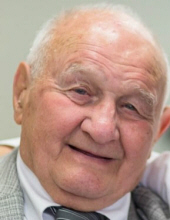 Joseph George was born June 20, 1932 in Waterbury, the son of the late Louis and Rosa Linda (Elia) Giampietro. Joseph George joined the Army & proudly served his country in the Korean War. In 1970, he married the love of his life Vincenza Ann aka “Chancey” in 1973 had one child, Joseph Jude. He and owned and operated Westbrook Nursery in Cheshire for many years until his retirement in 2007. Following the death of his wife, Joseph devoted himself to his son.

In 2007 & 2010 Joseph George was given the greatest gifts of his life, his grandsons Nicholas & Jude. “Poppy”, as he was affectionately known, lived with his son and best friend of 46 years; his daughter-in-law whom he treated as his daughter for 14 years; Nicholas for 11 years and Jude for 9 years. He lived his life for Joseph, Gina, Nicholas and Jude. Spending time with them gave him the greatest joy and was what he wanted most above all. He will be forever be missed in a home they all shared and would want those who loved him to celebrate his life rather than mourn his death.

Joseph George loved to garden and would often spend hours working in his yard. He took great pride in his gardening and loved having his grandsons help. His happiest and most cherished moments were watching Nicholas play baseball and watching Jude swim. He spent many amazing years creating a lifetime of memories with his little buddies.

Arrangements – Funeral services and committal are at the convenience of the family and there are no calling hours. The Alderson-Ford Funeral Home of Cheshire is assisting with arrangements. In lieu of flowers, please consider making a contribution to the Dementia Society of America.
To order memorial trees or send flowers to the family in memory of Joseph G. Giampietro, please visit our flower store.