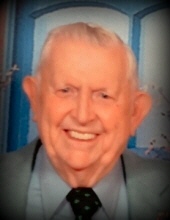 WESTON, FL – John Patrick Berry, 94, died peacefully at home on Tuesday, November 12, 2019. He was a beloved husband, father and grandfather.

John was born March 8, 1925 in Waterbury, CT, the only son of the late Peter and Helen Jordan Berry. He was predeceased by his beloved wife Mary Meehan Berry and his two sisters, Jane Green and Mary Augustaukas.

After graduating from Sacred Heart High School, he served his country in the US Army, Company H/346 Regiment, 87 Infantry Division “Patton’s Army”. John marched and fought carrying a 75 lbs. machine gun on his back from St. Vith, Belgium to Dresden, Germany. He received a Bronze Star from the Army and returned to Waterbury in April 1946.

Following the war, he began working at the Waterbury Farrel Foundry Company as an apprentice wood pattern maker and then at Chase Brass & Copper Company and the Bristol Company until he received his certification in 1949.

With the assistance of the GI Bill, he put himself through college and graduate school attending in the evenings over the course of many years. He received his B.S. Degree from Central Connecticut State University and his M.S. degree in Education from Southern Connecticut State University. He taught in the Waterbury Public Schools for 30 years and earned a reputation nationally for his skills in teaching physics. He attended several summer programs sponsored by the National Science Foundation. He built the audio-visual program at Kennedy High School and could be seen running the lights and sound for many high school plays and programs. Often, he enlisted one of his children to assist him.

John was an avid hobbyist and loved woodworking, photography, gardening and especially raising orchids. He had a tremendous “green thumb” and could grow anything from a clipping or a seed. While living in Waterbury he spent many hours in his greenhouse attached to his home.

He was a sports enthusiast and throughout his life followed the Boston Red Sox, New York Giants, New England Patriots and Notre Dame football. In his later years he worried about whether he would ever see the Red Sox win a World Series. He was fortunate to see them win four!

John was active in the Naugatuck Lodge of the Benevolent and Protective Order of Elks for many years and rose to the position of Exhalted Ruler in 1987. John always gave freely of his time and never knew how to say “no” when asked to serve on a committee. He enjoyed participating on scholarship committees probably because he remembered those hard times when he was trying to get an education.

Following retirement from teaching, John and Mary divided their time between Southbury, CT and Boca Raton, FL. He took up researching genealogy for both his family and Mary’s. Together they made several trips with family members to Ireland and England to discover “new cousins”. Cruising also became a new hobby!

John was a communicant of Blessed Sacrament Church for over 45 years and later Our Lady of Lourdes Church in Boca Raton, FL and St. Mark Church in Southwest Ranches, FL. He was a devout catholic and upon retirement attended Mass everyday.
John is survived by his four children, Peter and his wife Suzanne of Naples, FL; Paul and his wife Stephanie of Woodbury, CT; Eileen of Weston, FL; Catherine, and her husband James Barnum of Warren, NJ. John has five grandchildren Meghan and Brennan Berry; Timothy, John and his wife Allison, and Claire Barnum.

Funeral services will be held on Tuesday, November 19, 2019, with the funeral procession leaving the Alderson-Ford Funeral Home of Waterbury, 496 Chase Avenue at 9:15 and proceeding to Blessed Sacrament Church for a Mass of Christian Burial at 10:00 a.m. Burial will follow in Mt. Olivet Cemetery in Watertown. Calling hours will be held on Monday from 5:00 p.m. to 7:00 p.m. at the funeral home.
To order memorial trees or send flowers to the family in memory of John P. Berry, please visit our flower store.