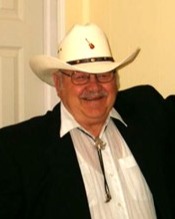 John Charles Mello Sr, a longtime resident of Naugatuck, went to Heaven to join his wife Theresa on Saturday, October 8, 2022. He was born August 16, 1930 in Tiverton, RI, the son of the late John and Delia (Faria) Mello. He was predeceased by his wife, Theresa (DeFranzo) Mello and son Mark Mello.

He worked for 41 years at Uniroyal as a firefighter. He also served 2 years in the US Army and was an Auxiliary State Trooper at the Bethany Barracks for 20 years.

After retirement, John and Theresa enjoyed traveling throughout New England. He played guitar for many years and had his own band when he lived in Tiverton. Johnny, as he was called by friends, was an active member of the Conn Bristol Ole Time Fiddle Club since 1997 and played at many senior centers, nursing homes and Fairs. He also enjoyed reading from his collection of Louis L’ Amour books and doing crossword puzzles.

For the last several years, he lived with his good friends Earl and Rose Bushey of Watertown, CT.

He is survived by his sister, Evelyn Destremps of Fall River, MA; children, Gary Mello and his wife Linda of Asheville, NC, John Mello Jr. of Clinton, CT, Patricia Duckworth and her husband Steven of Snellville, GA and his daughter in-law, Teresa Mello of Milford, CT. He also leaves 8 adoring grandchildren from whom he loved getting phone calls and 4 great grandchildren.

There are no calling hours and a private graveside service for family and close friends will be held at a later date.