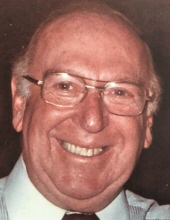 John “Jack” Coleman Conley, 97, of Osterville, MA, yet another of America’s disappearing “greatest generation”, died peacefully at home on March 28, 2019, surrounded by his loving family. He leaves his beloved wife of forty-five years, Margot Heyden Conley.

Jack was born to the late John C. and Anna J. (Kline) Conley in Belmont, MA in 1921. He graduated from St. Dominic Academy in Waverly, MA. His college career at Boston University was interrupted by the Second World War when he enlisted in the Marines on January 8, 1942. He served in the Pacific Theater for two and one half years. He was honorably discharged in September of 1945. He was awarded two Bronze Stars and several additional medals. He then attended Bentley College and was employed at Zurbach Steel Corporation for over forty-five years. He rose to Senior Vice President and General Manager of Zurbach’s Connecticut operation.

He retired to the Cape in 1987. He loved all sports, particularly skiing which he enjoyed until 85 years young. He also loved golf, the Red Sox and the Patriots.
He was a former member of the Waterbury’s Men’s Club, Country Club of Waterbury and Oyster Harbors Club in Osterville.

Jack carried a lantern throughout his entire life, he never dropped it or allowed it to extinguish. He carried this light to illuminate life’s path to all of us who followed behind him. Although he is no longer with us, his light and legacy will shine here on earth and in heaven forever.

A Funeral will be held at St. Bridget Church, Cheshire, CT on Friday, April 26th at 10:30 am. Burial will follow at Hillside Cemetery, Cheshire, CT.
A Memorial Mass will be held at Our Lady of the Assumption Church, Osterville, on Friday, May 3rd at 11:30 am.
In lieu of flowers, kindly contribute to The Salvation Army of Hyannis, PO Box 369, Hyannis, MA 02601, St. Jude’s Children’s Hospital, PO Box 50, Memphis, TN 38101-9929 or The Osterville Library, Main St., Osterville, MA 02655.
To order memorial trees or send flowers to the family in memory of John "Jack" Coleman Conley, please visit our flower store.