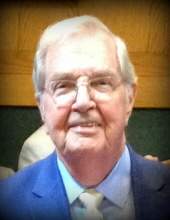 WALLINGFORD – John J. Murphy (Jack), 87, passed away on Monday, September 13, 2021 at Salmon Brook Rehabilitation and Nursing Center in Glastonbury. He was the loving husband of Jean (McMahon) Murphy.

Mr. Murphy was born June 8, 1934 in New York, N.Y., son of the late William and Marion (Lane) Murphy. He retired from FCD Corporation, a Mark IV Company, where he worked as Vice President of Quality Assurance.

In addition to his wife of 63 years, Jack is survived by his daughter Joanne Murphy of Cape Canaveral, FL, his daughter Carolyn (Murphy) McAuliffe and her husband Michael of Durham, CT, his son John Murphy and his wife Elizabeth of Wallingford, CT. He will be greatly missed by his grandchildren Sean, Shannon, and Caitlin McAuliffe, as well as Walker, Patrick and Caroline Murphy. He also leaves behind his brother Robert and his wife June Murphy. In addition to his parents, he was predeceased by siblings William, Edwin, Bro. Mark Murphy OFM, Catherine, Bernadine, and James.

He served for 12 years on the Cheshire Parks and Recreation Commission, the last three years as Chairman. The highlight of his tenure was as Chairman of the subcommittee in charge of the development of the historical Lock 12 Park. For many years, he led a discussion group at the Cheshire Senior Center where he influenced, and was influenced, by many Cheshire residents. A gifted storyteller, Jack loved to share his life story with friends and family.

The mystery remains as to the reason why he continues to be on the TSA No-Fly List.

Family is everything. If you knew him you loved him – this was his gift. A wonderful friend to all, with a generous spirit and kind words for everyone he met.

Arrangements: - A Mass of Christian burial for Mr. Murphy will be held at 10:00 A.M. on Saturday, October 9, 2021, at St. Thomas Becket Church, 435 North Brooksvale Road, Cheshire. Friends are asked to meet directly at church. There are no calling hours and The Alderson-Ford Funeral Home of Cheshire, 615 South Main Street, is assisting with arrangements. For online condolences, to share a photo or a story, please visit www.fordfh.com.
To order memorial trees or send flowers to the family in memory of John J. (Jack) Murphy, please visit our flower store.