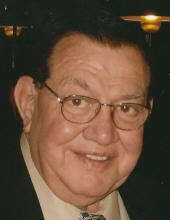 He was born in Waterbury on February 21, 1927 son of the late Emma (Blair) and John Earl Coleman Sr.

John enjoyed growing up in the Town Plot section of Waterbury with his friends. He was a caddy at the Country Club of Waterbury, and also worked for Frank Cruess and Sons grocery store on Highland Ave.

Mr. Coleman served in the Army during World War II and trained as a cannoneer on 105mm Howitzers in Fort Knox, KY, and later served with the 526th AAA Gun Battalion. After returning from the army, he was employed as a buyer for the Bristol Company in Waterbury. He later became Purchasing Agent for the Dot Fastener Division of TRW in Waterbury and Cheshire. John then became associated with the Powerwinch Division of Scott Fetzer, Berkshire Hathaway, where he was manager of Purchasing and Materials until his retirement.

John was a member of the Waterbury Elks Lodge B.P.O.E #265, the American Legion, and in his early years the Boy Scouts of America in Waterbury.

Mr. Coleman lived in Wolcott for 40 years until he moved back to Waterbury to be with his friend, a disabled veteran, who was diagnosed with cancer and with whom he lived. He was with his friend through all the care and hospital visits with doctors during this trying time.

John is survived by his nieces Kathleen Bergin and Maggie Bergin all of Portland, OR; close friend Kathy Brooks of Fairview, OR. He was predeceased by his sister Lois C. Bergin, brother in law Matthew Bergin, niece Susan Bergin, and friend of sixty two years, Rodney Martin.

Arrangements- A graveside service with full military honors will be held, 11 A.M, Thursday, September 26, 2019 at Mount Olivet Cemetery, 669 Platt Road, Watertown, 06795. Family and friends are asked to meet directly at the graveside. Burial will follow after the service and there are no calling hours. The Alderson-Ford Funeral Home of Waterbury, 496 Chase Ave, 06704 is assisting the family with the arrangements.
To order memorial trees or send flowers to the family in memory of John Earl Coleman Jr., please visit our flower store.