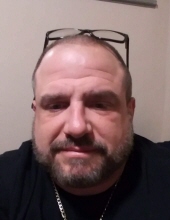 MERIDEN- Jeff Anthony Kurtz, 52, passed away, April 28, 2020 at his Meriden home. He was the devoted husband of Aretha Towns-Kurtz.

Mr. Kurtz was born December 30, 1967 in Waterbury, CT. and was the son of the late Harry W. Kurtz and Janice (Basile) Naczi. He attended John F. Kennedy High School and was co-owner and operator of Charter Oak Tree Service of Waterbury.

Jeff enjoyed being outdoors, whether he was cutting down trees with his father or fishing at the lake with family and friends. Jeff also loved playing cards, especially with his Uncle when he was young. Though Jeff struggled throughout his life he had an unmistakable laugh, great sense of humor, and a huge heart.

In addition to Reneé, his loving wife. Jeff is survived by his daughter Melissa Sauvageau-Green and her husband Douglas Green of Boca Raton, FL. He was also blessed with four step-children Alexis Berry, Alexander, Gabriella, and Mattie Ramos, all of Meriden. Jeff also leaves three grandchildren Douglas, Carla-Ann and Cosette Green of Boca Raton, FL. His sister Kim Kurtz-Bachiocchi and her husband Ed of Oxford; nephew EJ Bachiocchi.

All services for Mr. Kurtz will be private and held at the convenience of the family. The Alderson-Ford Funeral Home of Cheshire, 615 South Main St, 06410 is assisting with the arrangements.
To order memorial trees or send flowers to the family in memory of Jeff Anthony Kurtz, please visit our flower store.