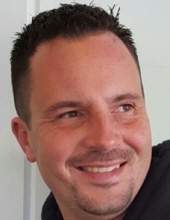 Jason Lynwood Baska, age 37, of Waterbury and formerly of Windsor passed away suddenly on Wednesday, November 13, 2019 at Waterbury Hospital. He was the devoted husband of Mayelyn Suriel, with whom he would have celebrated his first wedding anniversary with on November 18th. Jason was born on January 26, 1982 in Hartford, son of Douglas L. Baska and the late Bonnie S. (Coan) Baska.

Jason spent his early childhood growing up in North Carolina, before returning to Windsor as a teenager. He worked for himself and operated a landscaping company servicing Windsor and the surrounding towns. Jason revered being a husband and father, his two boys were the light of his life Jason loved being their Dad. He had an obsession with Mustangs, especially his “Sally” and enjoyed country music.

In addition to his wife, Mayelyn; Jason is survived by his cherished sons, Riley Carpe of Windsor Locks and Steven Rodriguez of Waterbury; his beloved father, Doug and his wife, Karen Baska of East Windsor; and his paternal-grandmother, Shirley Baska of Windsor. Jason also leaves his brothers, Tony Colla of Manchester and Jason Colla of Windsor; his sister, Stephanie Colla of Windsor Locks; nephews, Anthony, Stephan, Maddox and Ronen; and his loving aunts and uncles, Ralph and Cheryl DiLisio, Kenneth and Sharil Dufour, Kent and Suzie Baska, Ellen and John Romano, Scott and Wendy Baska; and Donna Coan. He will also be remembered and missed by his mother-in-law, Leticia Ramirez of Waterbury and father-in-law Felipe Suriel of NY; his brothers-in-law, Felipe “Gregory” Suriel and Luigi Rodriguez; and his dear friend, Jimmy Passino. Jason was predeceased by his mother, Bonnie Baska; his maternal-grandparents, Homer and Barbara Coan; and his paternal-grandfather, Lynwood Baska.

Friends may greet Jason’s family at the Alderson-Ford Funeral Home of Waterbury, 496 Chase Avenue, Waterbury, CT 06704 on Saturday, November 23, 2019 from 3PM until 5PM. At 5PM a Celebration of Jason’s Life will be held. Burial will be private and at the convenience of his family. Memorial contributions may be made to St. Jude Children’s Research Hospital, 262 Danny Thomas Place, Memphis, TN 38105. To leave online condolences for his family or to share a story of Jason, please visit www.fordfh.com
To order memorial trees or send flowers to the family in memory of Jason Lynwood Baska, please visit our flower store.