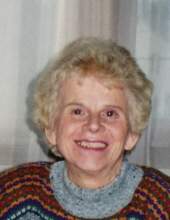 She was born Janice Ruth Grele, daughter of John and Martha (Painter) Grele in Waterbury, CT on March 19, 1933. Her father died when she was two years old. She and her brother were raised in Naugatuck by their single-parent mother who worked in the local factories to support the family during the depths of the Great Depression. Janice graduated from Naugatuck High School in 1951 where she formed friendships that would last her entire lifetime. The “gang” stayed close through the years and had many laughter-filled gatherings.

After high school, Janice began a job as a secretary at Lewis Engineering, a local company where she met Donald L. McCollum Jr. They married in September 1956 and settled into a home on Park Avenue, which they purchased with a GI loan and where they had three children. In 1969 the family moved to Round Hill Road. Donald passed away in April 2019.
In 1969, Janice returned to work as the parish secretary at St. Michael’s Church. She would stay there until her retirement in 1995. She was always an active member of the parish and was dedicated to the church, its clergy, and its congregation. She served on several church committees and contributed to the annual church fair. After her retirement from St. Michael’s, she worked part-time at the Howard Whittemore Library.

Janice loved Naugatuck and was always active in the community. She was a member of the Junior Women’s Club and the Naugatuck Garden Club, for which she served as president. Gardening was one of her passions, and she passed this on to her children. She also was active in local politics, serving on the Republican Town Committee, and was a nominee for burgess in the 1970s at a time when few women appeared on the ballot.

Janice is survived by her three children, Scott, Elizabeth, and James, and his wife Sharon, her grandchildren, Alexander, Samantha, Chelsea, and Shannon, her brother Ronald Grele, seven nieces and nephews, and extended family, and Kasey, the last of her many cats.

Services will be deferred until a time when her many family and friends can safely gather to celebrate her life. In lieu of flowers, contributions can be made to St. Michael’s Episcopal Church, 210 Church St., Naugatuck, CT 06770. The Alderson-Ford Funeral Home of Naugatuck is assisting with arrangements.
To order memorial trees or send flowers to the family in memory of Janice Grele McCollum, please visit our flower store.