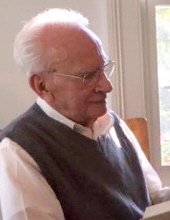 Mr. Brown was born September 12, 1922, in Branford, CT, son of the late William E. and Anna Marie (Lundberg) Brown. Mr. Brown grew up in Wallingford and lived in Cheshire for more than 60 years.

Mr. Brown is survived by his sons, James A. Brown Jr. (friend, Roberta Davies) of Cheshire and Gary R. Brown (Ginger Kulig) of Hamden, and his daughter, Susan A. Brown of Wellington, KY. He will also be missed by his grandchildren, Lila Brown, Lisa Goodrich (Scott), James A Brown III (Jeff), and his great grandchildren Zach and Zoe.

Mr. Brown will be remembered as a kind gentleman who was devoted to his family. In addition to Lorraine, his wife of more than 59 years, and his children and their families, Mr. Brown maintained close relationships with his 10 brothers and sisters and 33 nieces and nephews. He considered himself a member of the greatest generation and has written several family histories of growing up in the 20’s and 30’s in Wallingford. He also wrote an account of the experiences that he and three of his brothers had serving their country in WWII. Mr. Brown was a talented designer and builder who patented one of his designs. He loved gardens, flowers and all creatures great and small. He was a member of the First Congregational Church for more than 60 years.

Mr. Brown worked at Pratt and Whitney Aircraft as an electronics supervisor for more than 30 years. After his retirement he devoted his life to designing, building, gardening, writing, traveling, and spending time with his family. He remained active and lived independently until he was 97.

Arrangements – Funeral services will be held on Monday, January 13, 2020 at 11:00 A.M., at The First Congregational Church of Cheshire, 111 Church Dr. Friends are asked to meet directly at church. Burial, with full military honors, will follow at Walnut Grove Cemetery, Meriden. There are no calling hours and the Alderson-Ford Funeral home of Cheshire is assisting with arrangements. In lieu of flowers, memorial contributions may be made to Gaylord Hospital at https://www.gaylord.org/Support-Gaylord/Make-a-Gift.
To order memorial trees or send flowers to the family in memory of James A. Brown, please visit our flower store.