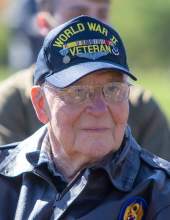 Born October 7, 1920 in Philadelphia, PA, the son of the late Robin R. and Ida (Boreman) Daubert, he was a longtime sales representative for Trailmobile and Puritan Clothing. Prior to working at Puritan Clothing he was the plant manager at Nauset Regional High School.

He is survived by his children Leslie (Bob), Mark (Abby) and Holly (Dave) and by his grandchildren, Justin, Mark, Jeffrey and David and a niece, Anna Helfer.

Irv served in the U.S. Army Air Corps during WWII, and was stationed in England where he flew combat missions as a B-24 Liberator crew member. He was a member of the Boy Scouts of America for 85 years and served as scoutmaster of Troop 51 in Cheshire. He was an active Freemason for 72 years belonging to Connecticut and Massachusetts lodges, as well as a member of the Scottish Rite and Shriners. He also served in the U. S. Coast Guard Auxiliary for 35 years.

He always considered Eastham his home where he lived for over 50 years. When he wasn’t fishing, hours were spent in the yard creating flower gardens with water features, planting an expansive vegetable garden and building birdhouses and feeding stations.

Arrangements - A Masonic funeral service will be held Saturday, April 30 at 11:00 A.M. at Alderson-Ford Funeral Home, 615 South Main Street, Cheshire, CT. Burial will be private. Memorial contributions may be made to Temple Lodge #16, 9 Country Club Road, Cheshire, CT 06410 and Because of the Brave, 560 Mixville Road, Cheshire, CT 06410.
To order memorial trees or send flowers to the family in memory of Irvin R. Daubert, please visit our flower store.