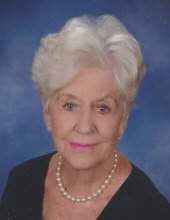 Irene (Stagis) Hall, 95, of Cheshire, passed away peacefully on Monday, April 17, at Regency House in Wallingford, after a brief illness. She was born in New Britain, CT on March 5, 1925, to Joseph E. Stagis and Harriet (Cosgrove) Stagis. Having moved to Hamden in 1928, she graduated from Spring Glen Grammar School, Hamden High School, and Larson Junior College. Irene worked as secretary to the executive director of the Connecticut Hospital Association until she married her high school sweetheart, Roger Hall, in 1950. She enjoyed watching football games and was an avid fan of the New York Jets. Irene and Roger spent winters in Puerto Rico for forty-five years, most recently in the Rio Grande. She enjoyed golf there and at the Farms Country Club and felt privileged to be able to accompany her husband on many business trips around the world.

The family wishes to express their appreciation for the compassionate care she received at Regency House, especially amidst the coronavirus situation, as well as from The HomeAides and Elim Park Re-habilitation.

A Memorial Mass will be celebrated at St. Bridget of Sweden Roman Catholic Church at later date. In lieu of flowers, memorial donations may be made to St. Bridget, 175 Main St. Cheshire, CT 06410, or to the charity of one’s choice.
To order memorial trees or send flowers to the family in memory of Irene (Stagis) Hall, please visit our flower store.