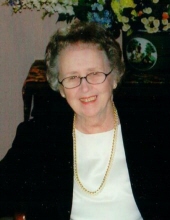 NAUGATUCK - Irene (Gustafson) Anderson, 94, died on October 11. She was the wife of the late Gordon Arthur Anderson. She was born in Chicago, Illinois on March 4, 1925, the daughter of John and Ruth (Lindgren) Gustafson. She was rasied in Chicago and attended North Park Academy and College. She further studied at Northwestern University and Louisiana State University. During World War II, she worked for Montgomery Ward in Chicago. While at North Park, she met her future husband and after the end of the war, they were married in 1946 and settled in Naugatuck, Connecticut. There, she raised three children and was active in many civic and church organizations. She was a member of the Naugatuck Women’s Study Club for over 50 years. She was a volunteer and member of the Waterbury Hospital Auxiliary, serving at one time as President. She served on the board of Pilgrim Manor at Covenant Village in Cromwell, CT and was a member of Mattatuck Museum. She served on the Board of Directors of the Naugatuck YMCAfor ten years. She was currently a member of the Naugatuck Congregational Church.

There are no calling hours. Burial will be private. Arrangements are by the Alderson-Ford Funeral Home, 201 Meadow St, Naugatuck. Contributions may be made to The Naugatuck Women’s Study Club c/o Barbara Paul 52 Booth Road Roxbury, CT 06783.
To order memorial trees or send flowers to the family in memory of Irene Anderson, please visit our flower store.