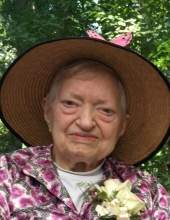 CHESHIRE – Hope Marie Ferguson Cooper, 98, passed away at her home Tuesday, December 22, 2020, surrounded by her loving family. She was the wife of the late Charles Burleigh Cooper Jr.

Hope was born May 10, 1922 in Bald Creek, N.C., daughter of the late Douglas and Esta (Robinson) Ferguson. She attended Mars Hill College and graduated from the University of Tennessee. She worked on the war effort at Oak Ridge, TN, where she met her husband and was married in 1945. She raised her children and lived most of her life in Newark, DE, where her husband was a professor at the University of Delaware. She moved to Cheshire in 1999 to live with her daughter and family. She dedicated her life to her husband and family as a loving homemaker and especially enjoyed time spent with her grandchildren.

Hope is survived by her daughter Jane and her husband Ian Meakin, of Cheshire; her son Charles Burleigh Cooper III and his wife Janice McOmber, of Emerald Hills, CA; and her grandchildren Sarah (Walter Cashore), Julia (Madeline Pomicter), and Karl Meakin; Katherine Myers-Cooper, Ryan (Smriti Mishra) Cooper, and Burleigh (Helen) Cooper, Edward Myers, and great-granddaughters Mia and Nisha. She was predeceased by her husband of 63 years, her daughter Barbara Hope, and her siblings Douglas, Margaret and Lawrence. The family would like to express their gratitude to Akua Mensah, who provided such compassionate care during Hope’s final years.

Funeral services and burial will be held at the convenience of the family and there are no calling hours. Memorial contributions may be made to the Cheshire Senior Center, 240 Maple Avenue, Cheshire, CT. 06410. The Alderson-Ford Funeral Home of Cheshire, 615 South Main Street, 06410, is assisting with arrangements. For online condolences, to share a photo or a story, please visit www.fordfh.com.
To order memorial trees or send flowers to the family in memory of Hope F. Cooper, please visit our flower store.