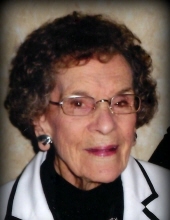 BEACON FALLS - Helen “Woody” Fassett, passed away peacefully at the age of 100 on Tuesday, August 18th, 2020 at her home. She was the wife of the late Howard Fassett, who passed away in 1995.

She was born July 25, 1920, in Bethany, daughter of the late Sherman and Margaret (Twing) Woodward. Woody grew up on Clovernook Farm where she helped her father run the farm after her mother’s early passing. She attended the one-room schoolhouse in Bethany and later Lasalle College for Women in Springfield, MA where she earned a degree in business. She fell in love and married a local farmer named “Howie Fassett” and was married for 50 years. Together they ran the locally famous Fassett Farm’s. They raised thousands of turkeys and chickens yearly and had an egg delivery and catering business. They were best known and loved for their take-out roasted chicken dinners which included potato salad and lemon meringue pie. “Howie and Woody” were featured in a 1952 Dept. of Agriculture documentary on farming. They retired after 43 years of a successful business.

She served as the President of the Board for the Middlebury Convalescent Home for 25 years. As well as serving on the Board of Directors for the Red Cross from 1991-1997. She was an active lifelong member of the Bethany First Church of Christ.

She is survived by her daughter Cynthia F. Resha and her husband Thomas-Jude; her grandchildren Thomas J. Mariano and Kaylee A. Resha; her three great-grandchildren Emma, Myles, and Finley Mariano; and many loved nieces and nephews. In addition to her parents and her husband, she is predeceased by, daughter Donna Fassett-Merritt, her sister Marion W. Sandell, brother-in-law Dudley Sandell, brother Sherman (Monk) Woodward and sister-in-law Barbara.

Arrangements – A Memorial Service will be held at a later date and a private burial will be held in Grove Cemetery. The Alderson-Ford Funeral Home is assisting with arrangements. Memorial contributions may be made to Beacon Hose Co. #1, 35 N Main St, Beacon Falls, CT 06403, or to Middlebury Convalescent Home, 778 Middlebury Rd, Middlebury, CT 06762.
To order memorial trees or send flowers to the family in memory of Helen "Woody" Fassett, please visit our flower store.