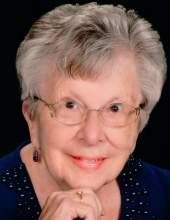 A private family-only service celebrating Mrs. Dunne’s life will be held in the coming days. Donations in her memory can be made to the Cheshire First Congregational Church (Christian Education and Music), 111 Church Drive, Cheshire, CT 06410.

She was born on January 15, 1929 in Collingswood, N.J., daughter of the late Elly K. Bremser and Albert Bremser, and was raised and educated in Sydney, N.Y. She graduated from Russell Sage College in 1950, with a degree in Spanish. Mrs. Dunne lived in the Spanish House and sang in the choir making good friends for life. After graduation, she took graduate courses in Education. On August 26, 1950, she married Richard H. Dunne at the Congregational Church, in Sidney. They lived in Aruba, N.A. from 1954 until 1959, where they started their family and returned to the United States settling in a country home in Norwood, New York.

Mrs. Dunne’s passion was education and she taught Spanish in Potsdam High School, NY, and then, a combination third and fourth grade at Norwood Grade School. In addition to being a wonderful mother, including as a Girl Scout leader, she was a gardener, painter (water color), volunteer and bridge player. After retirement, Mr. and Mrs. Dunne moved to Canton, New York, and she continued to volunteer, including on a board to bring affordable day care to the area and with the Canton United Methodist Church. Also, the League of Women Voters, Canton Garden Club, and the Canton Historical Association. She also served as Canton Democratic Chair. Mr. and Mrs. Dunne enjoyed canoe trips in the Adirondacks as well as traveling, including to Europe. After Mr. Dunne passed, she moved to Wallingford (Masonicare) in Connecticut in to be with family and continued to garden and volunteer with the Cheshire First Congregational Church and with the Cheshire Democratic Women’s Club. She also enjoyed several trips (including Alaska) with her sister Helma.

The Alderson-Ford Funeral Home of Cheshire has been entrusted with her care. To leave her family online condolences or to share a story of Mrs. Dunne, please visit www.fordfh.com
To order memorial trees or send flowers to the family in memory of Hannelore Dunne, please visit our flower store.