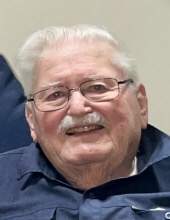 Gerald P. Miller, age 83, of Middlebury passed away on Saturday, October 2, 2021 at St. Mary’s Hospital, VITAS. Jerry was the devoted husband of Noa (Folman) Silberberg Miller for over 26 years. He was born on January 28, 1938 in The Bronx, NY, son of the late Max and Sarah (Golofsky) Miller.

Jerry earned his Master’s degree in Engineering and worked for several companies during his career as an electrical engineer, to include CBS Laboratories and LRB (Linear Rotary Bearings, Inc.) where he continued on as a consultant following his retirement. He enjoyed every moment with his wife, Noa, and his family meant the world to him.

In addition to his wife, he is survived by his son, Jeffrey Miller and his wife, Cheryl of Potsdam, NY; and his step-sons, Steven Silberberg of Hull, MA and David Silberberg and his wife, Goldie of Baltimore, MD. Jerry also leaves his loving grandchildren, Rebecca Miller, Shira (Ezra) Balsam, Chaya (Baruch) Muskowicz, Adina (Abraham) Gaier, Aaron (Esty) Silberberg, Gali (Haim) Gelberman, and Chana Silberberg; his 12 cherished great-grandchildren and his nephews, Howard and Alan Miller. He was predeceased by his brother Donald Miller and his wife, Dorothy.

Arrangements- A Funeral Service will be held on Monday, October 4, 2021 at 10AM at B’nai Shalom Synagogue, 135 Roseland Avenue, Waterbury, CT 06710. Burial will follow at 2:30PM in New Montefiore Cemetery, 1180 Wellwood Avenue, West Babylon, NY 11704. The Alderson-Ford Funeral Home of Waterbury is assisting with his arrangements. Shiva will be observed on Tuesday, October 5, 2021 until Friday, October 8, 2021 at the family’s home. Memorial contributions may be made to the B’nai Shalom Synagogue. www.fordfh.com
To order memorial trees or send flowers to the family in memory of Gerald P. Miller, please visit our flower store.