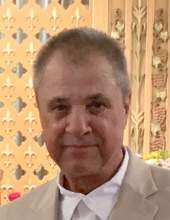 Mr. Brown was born November 15, 1947 in Waterbury, son of the late James and Idila (Moon) Brown. He was the former owner of Brown Roofing which he founded in 1972, and a resident of Naugatuck for many years. He graduated from Naugatuck High School in 1965 and proudly served his country in the United States Army during the Vietnam War.

Arrangements: His funeral will be held on Thursday, July 7, 2022 at 10:15 A.M. from the Alderson Funeral Home of Naugatuck, 201 Meadow Street, and proceed to St. Francis of Assisi Church, 318 Church Street, for a Mass of Christian Burial at 11:00 A.M. Committal services, with full military honors, will be in St. James Cemetery, Naugatuck. Friends may call at the funeral home on Wednesday, July 6, 2022, from 5:00 to 8:00 P.M. In lieu of flowers, donations can be made to the Wounded Warrior Project, P.O. Box 758517, Topeka, KS 66675-8517.
To order memorial trees or send flowers to the family in memory of Gary J. Brown, please visit our flower store.