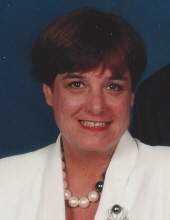 Riki was born in Kirkwood (St Louis) Missouri on January 11, 1948 and moved to Cheshire in 1955. Riki attended Cheshire High School, and graduated in 1966. After relocating out of state, she moved back to Cheshire in 1978 and has lived here ever since.

Riki began her real estate career in 1986 with Cheshire Real Estate, which was subsequently purchased by De Wolfe Real Estate. She spent the past 17 years with Coldwell Banker Residential Brokerage after they acquired De Wolfe in 2002. She retired in 2019. She was a member of Suburban Garden Club and, along with her twin sister Kathleen Dill, judged all of the flower arrangements at the annual Grange Fair from 1984 through 2020.

Besides leaving behind her loving husband Peter, she is survived by her son Christopher Schrumm of Alexandria, Virginia and her daughter Elizabeth Schrumm Swann and her husband Jimmy Swann of Raleigh, North Carolina. She also leaves behind her twin sister and her husband, Kathleen and Sheldon Dill of Cheshire, nephews Alexander Dill of New Britain and Matthew Dill and his wife, Adrianne Dill of Middletown, niece Lorrie Calabrese Keller of Fenton, Missouri and twin grandsons, Winston and Gideon Schrumm. She was predeceased by her sister Fern Calabrese, also of Fenton, Missouri.

A reception celebrating Riki’s life will be held at the Alderson-Ford Funeral Home of Cheshire 615 South Main Street on Saturday, September 18th, from 4:00 to 6:00 pm. In lieu of flowers, a donation in Riki’s name can be made to Connecticut Hospice in Branford or Smilow Cancer Center at Yale University. For additional information or to leave words of condolence please visit www.fordfh.com.
To order memorial trees or send flowers to the family in memory of Fredericka "Riki" Gail Oppenheim, please visit our flower store.