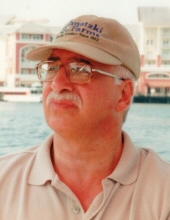 Frederick J. “Fred” Jarjura, age 66, of Cheshire passed away unexpectedly on Friday, January 8, 2021 at St. Mary’s Hospital in Waterbury. He was the devoted husband of Kim (Aliano) Jarjura for over 31 years. Fred was born on February 17, 1954 in Waterbury, son of the late Joseph “JP” and Anna (George) Jarjura.

Fred dedicated his life to his work at J.P. Jarjura & Sons and his family. His work ethic was second to none, but for as hard as he worked, he loved his family just as much. It is quite possible that Fred knew more about produce than anyone else on the planet! Fred was an accepting, loving and supportive father, and taught his children many valuable life lessons and treasured Saturday night dinners, western films and American history. He was proud of his Lebanese Heritage; he was a former member of the Ehden-Lebanese American Club of Wolcott and his family enjoyed when he would play his darbuka (Lebanese drum).

His Funeral Mass will be held on Saturday, January 16, 2021 at 10AM in Our Lady of Lebanon Maronite Catholic Church, 8 E. Mountain Rd., Waterbury, CT 06706. (Friends are asked to meet directly at church.) Interment will follow at Calvary Cemetery, E. Main St., Waterbury. There are no calling hours. The Alderson-Ford Funeral Home of Cheshire has been entrusted with his arrangements. Memorial contributions may be made to the St. Jude Children’s Research Hospital, 262 Danny Thomas Place, Memphis, TN 38105, www.stjude.org To leave online condolences for his family, please visit www.fordfh.com
To order memorial trees or send flowers to the family in memory of Frederick J. "Fred" Jarjura, please visit our flower store.