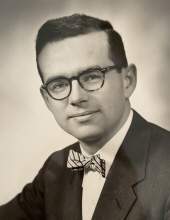 He was educated in the Port Chester public schools and was the valedictorian of the class of 1943. He received a Bachelor’s degree in chemical engineering from The Cooper Union in 1947 and earned an MBA from New York University in 1954. Frank was employed by American Cyanamid for 41 years in various technical, marketing, and management positions, retiring in 1986 as president of CYRO industries, a joint venture subsidiary of Cyanamid in partnership with Rohm GmbH, a German firm.

Upon his retirement, Frank became involved in a series of charitable, service, and local political activities. He served in public roles for over 20 years on the Cheshire Board of Education, the Public Building Commission, and the Planning and Zoning Commission. He was an active member of the Cheshire Democratic Town Committee. He was a longtime Friend of the Cheshire Library and a member of the Exchange Club. He worked as a volunteer on the 1987-1990 capital campaign for The Cooper Union and served as an executive recruiter for the International Executive Service Corps for eight years.

Frank was a communicant of St. Peter’s Episcopal Church in Cheshire until his death. He served that congregation as a member of the vestry and as treasurer. As part of the Thresholds program, Frank counseled on life skills at the Cheshire prison. During his residence at Elim Park, Frank served two years as head of its resident council. He was a 50-year member of the Farms Country Club in Wallingford and served on its Board of Directors for two years.

He had many other interests. Frank was an active gardener and enjoyed golf and tennis and was an avid Bridge player. He was a music lover, a student of history, and had many wonderful trips throughout the world with Janice. He liked to keep busy. He enjoyed, and was lucky in, life.

Frank is the beloved father of Constance Miner (Greg Lalley) of Washington DC, Judith Miner of Kensington, MD, and Rebecca Wentworth (Greg Wentworth) of Somers, CT. He also leaves his cherished grandchildren Andrew Lalley (Amy Macneil) and Emma Lalley (Ryan Andrews). He was predeceased by a half-brother, Travis, of Pasadena, CA and a brother, John, of Santa Monica, California.

His family would like to extend their sincerest gratitude to Frank’s caregivers Kofi and Jonathan as well as to the staff of Connecticut Hospice for all the love and compassion they showed him during his final days.

Frank’s funeral service will be held on Tuesday, April 19, 2022 at 10:30AM in St. Peter’s Episcopal Church, 59 Main Street, Cheshire, CT 06410. Burial will follow in Cheshire Hillside Cemetery. In lieu of flowers, contributions can be made to the Cheshire Community Food Pantry, 175 Sandbank Road, Cheshire, CT 06410 or to a charity of your choice. The Alderson-Ford Funeral Home of Cheshire is assisting with the arrangements. For online condolences or to share a photo or story, please visit www.fordfh.com

To order memorial trees or send flowers to the family in memory of Frank W. Miner Jr., please visit our flower store.