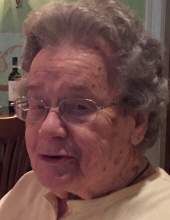 Mrs. Haigh was born February 14, 1922, in Dobbs Ferry, NY, the daughter of the late Robert and Aline (Monnier) Whan. She was a Draftsman for the Bristol Babcock Company, retiring in 1987 after 27 years of employment. She was a member of the United Methodist Church of Naugatuck and was a Past Matron of the Good Will Chapter, Order of the Eastern Star. She also served as a Rainbow Advisor.

Arrangements – Funeral services and committal in Grove Cemetery will be held at the convenience of the family and there are no calling hours. The Alderson-Ford Funeral Home of Naugatuck is assisting with arrangements. Memorial contributions may be made to the United Methodist Church of Naugatuck, 208 Meadow St., Naugatuck, CT 06770.
To order memorial trees or send flowers to the family in memory of Frances M. Haigh, please visit our flower store.