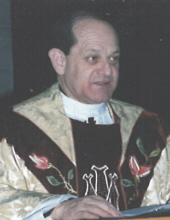 Fr. Tarsicio Luis Samaniego Barriga, L.C., died Wednesday, June 15, 2022 in New Haven, CT. He was 87 years old and in his 54th year of priesthood. Fr. Tarsicio was a member of the Cheshire, USA Community, although he spent the last few months in a nursing home near Cheshire, CT. to receive necessary medical care.

Fr. Tarcisio was born in Puruándiro, Michoacán, Mexico, on November 21, 1934. He entered the vocation center, like his older brother, Fr. Alfonso Samaniego (who died in 2018), and, in 1953, received the Legion's novitiate.

Fr. Tarcisio was ordained a priest in the Parish of Our Lady of Guadalupe in Rome on December 24, 1967, by Cardinal Hildebrando Antoniutti. As a religious, he worked at the Cumbres Lomas Institute in Mexico City and later, as a priest, he was director of the CEYCA school from 1966 to 1990. In 1990 he was assigned to the Cheshire Novitiate and Humanities Center, where he served for many years as teacher and confessor. There he also spent his final years of illness. Many also remember him for his talent as a photographer, a task he performed since his formative years, including during the sessions of the Second Vatican Council.

A Brief summary of his apostolic activities include:
- Director of Ceyca College in the period 1975-1990. He carried out diverse activities of formation, culture and sports:
1. creator and founder of the Friendship Tournaments.
2. Creator of the Nativity plays with the participation of teachers and students.
3. Founder (along with Fr. Faustino Pardo) of a retreat and recreation center: Las Peñas; located near Yautepec, Morelos.
4. Obtained the land for the Ceyca high school and later began construction.
5. In 1977, Ceyca High School had 180 students. When Fr. Tarsicio moved to Cheshire in 1990, there were 1,100 students.
6. Founder of another center for retreats, spiritual exercises called ICIF. It is located at the foot of the Volcanoes, near the town of Amecameca.

The funeral mass for Fr Tarsicio Samaniego, LC will take place at the Legionaries of Christ Seminary 475 Oak Avenue in Cheshire, CT on Tuesday June 21, 2022 at 9:30 a.m. Burial will follow in Saint Bridget Cemetery. There will be a prayer vigil the evening before, June 20, 2022 from 8:00pm until 9:00pm at the Seminary.