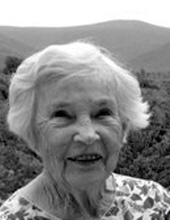 She was born in Naugatuck, CT on May 19, 1926, the second of three daughters of the late Michael Honan and Ethel (McEneaney) Honan. She attended Dunbarton College of the Holy Cross in Washington DC and later in life graduated from North Adams State College with a degree in History.

Chummy was a devoted mother and homemaker, who was active in the community, enjoyed her many friends and bridge groups, playing golf into her eighties and, with her husband of 56 years, tirelessly traveling the world. She was active in the League of Women Voters, Williamstown Garden Club, was a longtime volunteer at North Adams Regional Hospital, the Women's Exchange and the annual Milne Library book sales. She was a communicant of Sts. Patrick and Raphael Parish.

The family would like to thank the staff and dedicated professionals of Sweetwood of Williamstown, Home Instead Senior Care and Hospice Services of Western MA for the devotion and love with which they cared for our mother.

Graveside services and a celebration of her life will take place at a later date. Memorial donations may be directed to St. Patrick's Food Pantry or to the Western Massachusetts Alzheimer's Association through the Flynn & Dagnoli Funeral Home, West Chapels, 521 West Main St. North Adams, MA. To view these arrangements online, share a condolence, or an online photo please visit The Alderson-Ford Funeral Home at www.fordfh.com.
To order memorial trees or send flowers to the family in memory of Evelyn Gertrude Schoen, please visit our flower store.