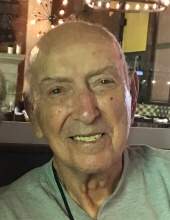 Eugene S. Mariotti, age 91, of Naugatuck passed away on Sunday, March 6, 2022, at Waterbury Center for Nursing and Rehabilitation with his loving family by his side. He was the devoted husband of Eva (Ricci) Mariotti for over 68 years. Eugene was born on September 13, 1930, in Naugatuck, son of the late Aldo and Genevieve (Romanski) Mariotti.

When Gene was born, he was so small and weak, his parents thought he wouldn’t survive. It was the depression and resources at the time were scarce, so a trusted neighbor suggested the use of an open oven as a makeshift incubator to keep Gene warm. In the days and weeks ahead, he slowly got stronger. Growing up during this time, every kid in the neighborhood was given a nickname. Due to Gene’s small birth size, he was called ‘Tiny’.

As a child, Gene’s family led a relatively austere life. They didn’t receive Christmas gifts or celebrate birthdays. No matter how hard things were during his early years, Gene still had fond memories of working in the back garden with his family and grandfather, raising chickens, goats, and pigs.

The family walked together each Sunday to attend mass at St Francis Church and on occasion would go out to Sandy Beach on Lake Quassapaug on hot summer days. On July 4th, they would gather to watch the town fireworks from the hill in the neighborhood.

From age seven, Gene always had several side jobs to help pay the families’ bills, such as delivering vegetables to the High Street neighborhood for Fritz Pappano, the neighborhood grocer, setting bowling pins at Annenberg’s Bowling Alley, washing dishes at Fred’s Highway Grill, and delivering newspapers.

Upon graduating from Naugatuck High School in 1948 he was employed by the U.S. Rubber Company (Uniroyal). Gene’s civilian working career was briefly interrupted by the draft. He served in the United States Army from 1951 to 1953. After Basic Training he was based at the White Sands Missile Range.

After his service in the Army, Gene married the love of his life, Eva Ricci on September 12, 1953, at Our Lady of Mt. Carmel Church in Waterbury. Gene and Eva raised their five children on Quinn Street in Naugatuck. Gene continued to work for Uniroyal and was also known for his strong work ethic and commitment to family accepting work as an usher for Packard Green Funeral home, and assistant to surveyor Brad Smith.

After their children left the house, the couple moved to a bigger house to accommodate their growing family. Gene was rewarded for his strong leadership skills and was able to complete the balance of his Uniroyal career in the Quality Group in Product Development. An opportunity that enabled him to travel throughout the world.

Even after retiring from Uniroyal after a 30+ year career, Gene continued to be productive. He worked for his brother-in-law, at Ray’s Lumber Yard in Wolcott, and for Naugatuck Saving Bank. He finally decided to take a more traditional “retirement” at age 80.

Although Gene loved volunteering at church, his duckpin bowling league, and fishing trips to Cape Cod with his brother John, he loved nothing more than Sunday pasta dinners with his children and grandchildren. These gatherings were an essential part of his weekends especially if he could beat an unsuspecting opponent at a friendly game of cribbage.

Gene remained close to all his siblings until their passing. His best friend growing up was Al Belillo, who he remained close to throughout his life. Gene is best known for his commitment to family and church. While his nickname “Tiny” may have fit his childhood stature, his heart and capacity to contribute to his community were anything but Tiny. Gene’s life was legendary because of the humility, kindness, and generosity he shared with all those who were lucky enough to cross his path.

He is the beloved father of Linda Mariotti of Waterbury; Diane Ostuni and her husband, Victor of Naugatuck; Chris Rozanski and her husband, Don of Woodbury; Jackie Mariotti-Costa and her husband, Joe of Cape Coral, FL; and Ron Mariotti and his wife, Colleen of Cervinia, Italy. Eugene is also survived by his 15 loving grandchildren, his 15 cherished great-grandchildren, one great-great-grandchild, and his treasured dog, Bentley. He was predeceased by his siblings, John Mariotti, Aldo Mariotti, Marcella Cowan, and Carol Hogg.

A Mass of Christian Burial will be held on Friday, March 11, 2022, at 11 AM in St. Francis of Assisi Church, 318 Church Street, Naugatuck, CT 06770, friends, and family are asked to meet directly at church. Entombment with Full Military Honors will follow in St. James Cemetery, Cross Street, Naugatuck. Memorial Contributions may be made to St. Francis of Assisi Church. The Alderson-Ford Funeral Home of Naugatuck is assisting Eugene’s family with the arrangements. To leave his family online condolences or to share a story of Eugene, please visit www.fordfh.com

To order memorial trees or send flowers to the family in memory of Eugene S. Mariotti, please visit our flower store.