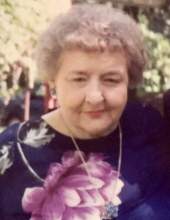 WATERBURY- Erma Honegger 90, passed away peacefully, Friday, August 20th, 2021, at Waterbury Gardens nursing home. Erma was the widow of William H. Honegger Jr. who passed away on February 10, 2020, after 60 years of marriage.

Mrs. Honegger was born May 16, 1931, in Naugatuck, daughter of the late Willis and Mildred (Post) Fairchild. Erma grew up in Naugatuck attending local schools, then later after marrying William, moved to Middlebury where they raised their family.

Erma was employed at both Naugatuck glass, and Uniroyal before the birth of her third child "Billy" who suffered from down syndrome, from then on, she became a full time and lifelong caregiver to" Billy" until his death April 11, 2020.

Erma was a former member of Middlebury Congregational church. Erma had been an avid gardener and took great pride in her rose gardens. She was a member of her local Grange for 32 years. She was also an avid longtime fan of the Boston Red Sox and always made sure to watch every game.

Erma is survived by her daughter Dora Honegger and her children (Chris and Casey), her son Lawrence Honegger, his wife Joan and their children (Stacy and Paul and Paul's daughters Erma's great granddaughters), her son David Honegger Sr., his wife Melanie and their children (Katelyn, Rachael, and David Jr. and his girlfriend Erica Wallace and their son Oslo Erma's great grandson). Erma is also survived by a brother Fred Fairchild and his wife Sharon, her sister in laws Dorothy Fairchild and Joan Fairchild as well as her cousin Dorothy Parker who had been like a sister to her. Erma is predeceased by brother's Willis "Bill", Robert "Bob", George, and Donald Fairchild.

A calling hour for Mrs. Honegger will be held 10 to 11 A.M, Friday, August 27, 2021 at The Alderson-Ford Funeral Home of Naugatuck, 201 Meadow St, 06770. Erma’s funeral service will be held 11 A.M following the calling hour at the funeral home. Burial will follow in Grove Cemetery.
To order memorial trees or send flowers to the family in memory of Erma Honegger, please visit our flower store.