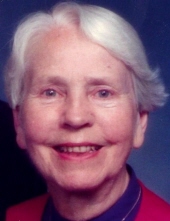 NAUGATUCK - Elna Lundin Blake, 102, went home to be with the Lord, Wednesday, December 25, (Christmas Night), 2019, at Middlebury Convalescent Home. For 61 years, she was the wife of Ralph Oliver Blake, who passed away in 2008.
Elna was born March 18, 1917, the second youngest of five children, all born in the family home on Park Ave. in Naugatuck. She was the daughter of the late Alfred and Emma O. Lundin. She lived most of her life in Naugatuck.
It was Elna’s intention to pursue a career as a dietician, but due to the sudden death of her father, during her senior year at Naugatuck High School, she needed to go to work in order to help support her family. Since Elna had graduated from N.H.S. with a business diploma, she decided to continue her education in business by attending Post College in Waterbury. Afterward, she secured a secretarial position at the former Bristol Company, also in Waterbury, and worked for 11 years, before becoming a homemaker.
Prior to WWII, Elna met Milford resident Ralph O. Blake, who was, at that time, working at the U.S. Rubber Co. in Naugatuck. They became engaged to be married, but because Ralph was called to serve his country, they both agreed to postpone their marriage until after the war ended. On the anniversary of Pearl Harbor Day, December 7, 1946, they were united in marriage at Salem Evangelical Lutheran Church, in Naugatuck.
Since Ralph accepted a banking position at the old Milford Trust Co., he and Elna began their married life in an apartment on the Milford Green. Two years later, their only child, a baby girl, June, was born. Due to an illness Elna’s had at that time, Ralph though it best for them to move to Naugatuck where Elna could receive additional care from her family. Elna lived the rest of her life in Naugatuck, until, in 2014, she became a resident of Middlebury Convalescent Home. Bonding so well with the residents and staff at M.C.H., Elna participated in many wonderful and fun activities there and particularly enjoyed being a member of the Chime Choir, bowling and playing high bowl, just to name a few. She was a “late bloomer”, so to speak, having been an introvert most of her adult life.
Elma exemplified having the fruit of the Spirit with her gentle, loving, kind, quiet, calm, patient, cooperative, and humble nature. She was an avid Scandinavian cook and especially loved to bake cookies. Elna and Ralph encouraged June to sing in the church choir and study the piano and pipe organ. Elna enjoyed nature, especially bird and rabbit watching. She also like vacationing at Camp-of-the-Woods, a Christian resort, in the Adirondack Mountains of upstate NY where she made 2 holes-in-one on the mini golf course there at 99 and 100 years young! She also like family trips to Cape Cod, MA, Maine, Hershey, PA and even 18 summers on Prince Edward Island (P.E.I.), Canada.
For 95 years, Elna had been a member of the previous Salem Evangelical Lutheran Church on Salem Street in Naugatuck, was baptized, confirmed, taught Sunday School, and sang in the Salem church choir. She also performed in a number of large area festivals. For the last 10 years, Elna attended Northfield Bible Church in Northfield, CT, where her faith was revitalized by her relationship with the Lord, her new church family, and under Shepard, Pastor Brian E. McGray, her loving brother in Christ.
Elna is survived by her daughter June E. Blake, of Naugatuck. Besides her parents, Elna was predeceased by her siblings, Helen Bjorklund (Eskil), Arnold Lundin (Ruth), Burton Lundin, and Arline Lundin. She leaves a niece, Beryl Montville (Peter) of Naugatuck, and two nephews Walter Rhodes (Donna) of Milford and Robert Salvo of CA. She was predeceased by another niece Elaine L. Rook (Capt. E. Clark Rook, U.S.N. Ret.) of Fairfax County, VA. She also leaves three cousins: Justine S. Kirkwood of Brewster, MA, Sandra L. Barbeau of Springfield, MA and Warren Lackstrom of MA.
Daughter June and her longtime friend, David L. Palmer, of Waterbury, are grateful to the lord for the many years he blessed Elna. June and David would also like to thank Jeanine Hammitt, administrator, and the entire staff and residents of the Middlebury Convalescent Home where Elna received “Care Beyond Compare” treatment for the friend, for the last five years of her life.
Arrangements – A Memorial Service, officiated by Pastor Brian E. McGray, is scheduled to take place on January 4, 2019, at 11:00 a.m. at Northfield Bible Church, 10 Camp Hill Rd., Northfield. Burial will be held later in the spring in Grove Cemetery, Naugatuck. Visitation is scheduled to be held on Friday, January 3, 2019, from 4:00 p.m. to 6:00 p.m. at the Alderson-Ford Funeral Home of Naugatuck, 201 Meadow St. Memorial contributions may be made to the Northfield Bible Church, 10 Camp Hill Rd., Northfield, CT 06778 or to Camp-of-the-Woods (Gospel Volunteers Inc.), P.O. Box 250, Speculator, NY 12164.
To order memorial trees or send flowers to the family in memory of Elna L. Blake, please visit our flower store.