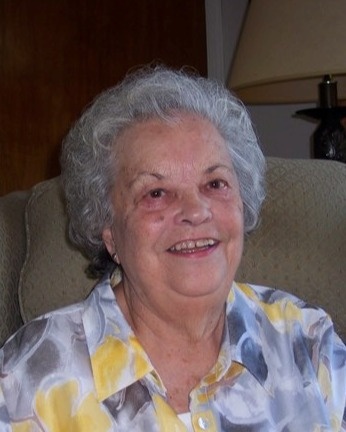 Ellie was born in Waterbury in 1937, and was the daughter of the late Honorius and Olga (Pekrul) Chabot. She attended schools in Waterbury, but in 1955 was a member of Cheshire High School’s first graduating class. From 1955 through 1961 Ellie was employed by the Cheshire Board of Education as Secretary to the Principal of Cheshire High School. She later worked as a legal secretary and bookkeeper. Prior to her retirement in 2000, she was also an Administrative Assistant for the Judicial Branch at the Waterbury Housing Court. Ellie was a member of the Cheshire Lutheran Church. She was also a member of the Cheshire Historical Society, Cheshire Seniors’ Center, the German-American Society of Bristol, and the Connecticut German-American Day Committee.

In addition to her husband Ray, she is survived by her son Robert and his wife Katherine; her granddaughters Lauren and Rachel, one aunt and one uncle (Lillian and Ken), and her three godchildren - Karen, Susan and Paul. In addition to her parents, she was predeceased by her brother Ronald, and her godson Scott.

Family and friends may gather at the Alderson-Ford Funeral Home of Cheshire 615 South Main Street on Sunday September 25, 2022 from 2:00 p.m. until 4:00 p.m. Funeral services in celebration of Ellie’s life will be held on Monday September 26, 2022 at 10:00 a.m. at the Cheshire Lutheran Church 600 West Main Street. Burial will follow in Cheshire Hillside Cemetery.
To order memorial trees or send flowers to the family in memory of Eleanor (Chabot) Verner, please visit our flower store.