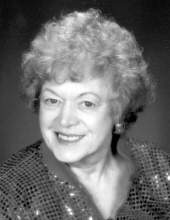 CHESHIRE - Eleanor Eva (Zemaitis) LaFauci Smith, 100, passed away peacefully on Sunday, May 23, 2021 at Elim Park Health Care & Rehabilitation. She was the widow of the late Norman Smith and Eugene C. LaFauci.

‘Nellie’ was born Anelda Eva Zemaitis on April 10, 1921 in Waterbury Hospital, to the late George and Anne (Lucas) Zemaitis of Bethlehem, CT. She was a ‘farm girl’ most of her life, although afflicted with polio at the age of 16, she was strong and survived through the Great Depression, World War II, Korean War, Vietnam War, an AIDS epidemic and COVID pandemic. She saw the completion of the Empire State Building, and watched as Amelia Earheart crossed the Atlantic, Rosa Parks started a movement, and Neil Armstrong stepped foot on the Moon. In her lifetime radio became records, cassette tapes became CD’s and in 1983 came the birth of the Internet. She rode ponies, and donkey’s, drove a car with a rumble seat, danced the polka and marched in parades. She shared a century with Prince Philip, the Duke of Edinburgh. Eleanor saw 18 presidents take office, witnessed the Berlin wall go up (1961) and come down (1989). She was a child of Lithuania immigrants, her life spanned many historical eras, from the peaceful days on a country farm to the rough and tremulous times of the modern media era. One of six children, there were often tough times but Nellie graduated high school. She changed her name to Eleanor and went to work at Princeton Mills in Oakville, where she met her husband Eugene. They married in 1951 and had three children they raised on a small farm Middlebury, CT. She went to work at Timex/Bendix Corporation, retiring after 37 years of service. At the age of 80 years she eloped and married Norman Smith. After Norman’s death in she went to live in Cheshire. Eleanor loved her family and friends and was always happy to see them – She was a courageous survivor who did what needed to be done. We been blessed to have had her in our lives for so long.

Arrangements: A calling time will be held Saturday morning May 29th from 8:30- 9:15 AM at The Alderson-Ford Funeral Home, 615 South Main St, Cheshire. Mass will be held at St. Bridget of Sweden Parish / St. Thomas Becket Church, 435 North Brooksvale Road, Cheshire, at 10:00 AM. Burial will follow in Mount Olivet Cemetery, Watertown. In lieu of flowers, donations in her name, may be made to the charity of your choice. A tree planting will be held in the fall.
To order memorial trees or send flowers to the family in memory of Eleanor Eva LaFauci Smith, please visit our flower store.