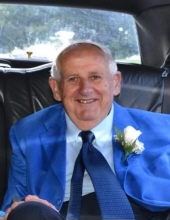 Dr. Matyszewski was born April 17, 1937, in Bridgeport, CT, the son of the late Stanley J. and Agnes (Malyszka) Matyszewski. He attended Fairfield Preparatory School (Class of ‘54) before receiving his Bachelor of Arts in Biological Sciences from The Johns Hopkins University in 1958 and graduating from the Yale University School of Medicine in 1962. He interned at The Upstate Medical Center of New York in Syracuse in 1963 before proudly serving in the United States Army Medical Corps as Captain and Chief of Preventative Medicine at Fort Bliss, Texas, 1963-65.

Dr. Matyszewski then practiced anesthesia for 32 years at both Waterbury Hospital and St Mary’s Hospital in Waterbury, CT, the latter at which he served as Chairman of the Anesthesia Department for his final 18 years at work. He was a member of The American Medical Association, The American Society of Anesthesiologists, The Connecticut Medical Society, and The Connecticut Society of Anesthesiology, for which he served as one of the first members of the New Haven Claims Committee.

Stanley was a resident of Cheshire since 1970 and was an avid volleyball player, a Boy Scouts volunteer, and a staunch supporter of Johns Hopkins lacrosse. He enjoyed traveling and cruising and visiting with his family, children, and grandchildren.

Arrangements – Calling hours will be held on Friday, December 4, from 4 - 7 p.m. at the Alderson-Ford Funeral Home, Cheshire. Funeral services will be held on Saturday, December 5, 11 a.m. at St. Bridget Church of Sweden, Cheshire.
To order memorial trees or send flowers to the family in memory of Dr. Stanley Eugene Matyszewski, please visit our flower store.