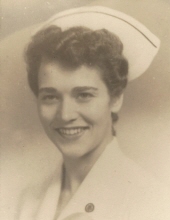 Mrs. Edwards was born on March 9, 1925, daughter of Wallace and Anita (Griswold) Gladwin. She was predeceased by her husband of 59 years, Bruce H. Edwards.

Settling in Cheshire in 1967, Dorothy (Dot) soon became an active member of the community. A parishioner of St. Peter's Episcopal Church and lifelong gardener, Dot joined the Cheshire Garden Club, serving in numerous positions including President and Treasurer. Dot and her husband were both enthusiastic members of the Cheshire Cats Square Dance Club. A Registered Nurse (University of Connecticut, 1948), Dot often volunteered at blood drives as a history nurse, and still found time to enjoy bowling with the Newcomers.

Dot is survived by a daughter, Janet A. Edwards of Cheshire, her two sons, Richard G. Edwards (Cathy) of Brookfield and Bruce E. Edwards of Wolcott, and two grandchildren, Ian and Louisa Edwards. She was also the cherished aunt of Liz Bates (Rob), Barbara Bell (Dick), John Nichols (Anita Sue), and Susan Martin (Harold). She was predeceased by her sister and brother in law, Cora Belle and Richard Nichols.

A Memorial Service will be held on Friday, November 8, 2019 at 11:30 a.m. at St. Peter’s Episcopal Church, 59 Main St., Cheshire. Burial will be held at the convenience of the family. Calling hours will be held on Thursday, November 7, from 4 to 7 p.m. at the Alderson-Ford Funeral Home of Cheshire, 615 S. Main St. Memorial contributions may be made to the Cheshire Animal Shelter P.O. Box 523, Cheshire, CT 06410-2249.
To order memorial trees or send flowers to the family in memory of Dorothy Gladwin Edwards, please visit our flower store.