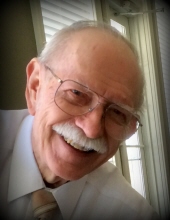 CHESHIRE - Donald J. Bunger, 89, passed away peacefully at his home with his daughter, Valerie, by his side. He was the husband of the late Eleanor (Ross) Bunger.

Donald was born June 4, 1931 and is predeceased by his parents, Herbert and Gladys (Burdick) Bunger, and brother Raymond (Dorothy) Bunger. He leaves behind son Robert (Deborah) Bunger, and daughters Donna Font and Valerie (James) Carroll. He has 8 grandchildren, 4 great-grandchildren, a nephew and nieces, whom he adored.

Donald was born in the Bronx, but grew up over the bridge in Dumont, NJ. He received both his BA and Masters Degree at Montclair State. He was an applied mathematician, statistician, and technical consultant, and for many years worked for Uniroyal where his focus was on tire tread design. As a consultant for Spalding, he was proud of the 8 patents he held on a new golf ball design. He also had keen interests in astronomy and genealogy, and even created a program that tracked ancestry long before other such online programs existed.

Besides his mathematical and scientific side, Donald was also a prolific poet. You never knew when you would find a special gem inside a greeting card! For his 50th birthday, he wrote a poem that mentioned every person who attended the celebration and he read it out loud for everyone to enjoy. He even co-authored two hymns, one honoring his long-time church, the Naugatuck Congregational Church and the other for Elim Park in Cheshire, where he spent the twilight of his years.

Donald was a baritone who used his gift throughout his life to glorify God. He sang with the Billy Graham Crusade Choir at Madison Square Garden in 1957 and was a member of his Naugatuck church choir for many years. At Elim Park he was a member of the church choir, bell choir, and "Harmonizers", a barbershop-style singing group that performed regularly for the nursing home residents as well as special events in the facility throughout the year.

At Elim Park, Donald enjoyed playing cards, bingo, and shuffleboard with his dear friends, and was also a member of a poetry club and was active in the resident association.

Donald was a man of faith with many talents and interests who loved his family and cherished his friends. He will be missed by all.

Arrangements: A graveside service will be held on Wednesday, July 22, 2020 at 10:30 a.m. at George Washington Memorial Park, 234 Paramus Rd., Paramus, NJ. There are no calling hours and the Alderson-Ford Funeral Home of Cheshire, 615 South Main Street, is assisting with arrangements. For online condolences, to share a story or a photo, please visit www.fordfh.com.
To order memorial trees or send flowers to the family in memory of Donald J. Bunger, please visit our flower store.