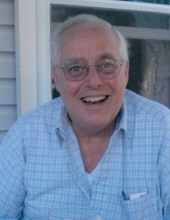 NAUGATUCK - Donald Clifford Lawson Jr. 77, passed away peacefully on July 18, 2019. He was the husband of Linda (Noble) Lawson.

Donnie was born in Perth Amboy, N.J. on November 12, 1941, the son of the late Donald C. Lawson Sr and Mary (Molnar) Lawson. After moving to Waterbury, Connecticut at a very young age, he went to several city schools before graduating from W.F. Kaynor Techincal High School in 1959. He worked for Timex Corp. for 32 years. When Timex moved to France, he went to work for CT Spring & Stamping and then to Precision Resources. Recently, he delivered flowers for Urban Floral in Wolcott. As a youth he played all sports and was a passionate Yankee fan. He was also a passionate bowler and was the first bowler in Waterbury to average 200. He also has two registered 300 games. In 1998, he was inducted into the New Haven County Bowling Hall of Fame. He met his wife, Linda, at the South End Bowling Lanes in the fall of 1962. They married on Oct. 9, 1965. They celebrated their 53rd anniversary last October.

Donnie was a member of the Naugatuck Elks Lodge #967. He enjoyed cooking, time with family, watching Yankee games, and scratch off lottery tickets, especially the Cashword.

Besides his wife, Linda, he is survived by his daughter Jennifer Lyn Lawson and her husband, Glenn Dietlin, of Winsted; his son, Donald C Lawson III; a grandson Kyle Lawson both of Naugatuck; a step-granddaughter Kahealani Nakoa, of Clearwater, FL and his brother-in-law Jon W. Noble and his wife Theresa of Waterbury.

Arrangements – Donnie’s funeral procession will leave the Alderson-Ford Funeral Home of Naugatuck, 201 Meadow St. on Tuesday July 23, 2019 at 9:15 and proceed to Christ Episcopal Church, 2030 East Main St., Waterbury for a funeral service at 10 am. Burial will follow in New Pine Grove Cemetery. Visitation will be held on Monday from 4 to 7 pm at the funeral home. Memorial contributions may be made to the Police Activity League of Waterbury, Inc., 64 Division St., Waterbury, CT 06704 or to Christ Episcopal Church, 2030 East Main St., Waterbury, CT, 06705.
To order memorial trees or send flowers to the family in memory of Donald Clifford Lawson Jr., please visit our flower store.