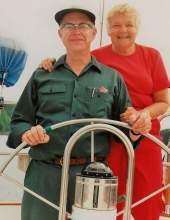 Friendship, ME - David W. Flood, 96, died peacefully while sleeping on June 20, 2022, at his beloved home in Flood’s Cove, Maine. David was the loving husband of Joyce for 65 wondrous years of family, friends and life.

He was born the son of Everett and Beatrice Flood in Portland, ME on May 27, 1926. After the passing of Beatrice, David and his three siblings were raised by Everett and Alice Flood.

David was raised in Augusta, where he met his high school sweetheart, Joyce Philbrick, and became married after his tour of army service during World War Il. He spent many summers at his grandfather’s property known as Captain Am’s Cove while growing up, where he developed a great fondness for sailing on the Maine coast.

After WWII, he went to school at Worcester Polytech, in Worcester, MA where he graduated with a chemical engineering degree. He then became employed by US Rubber Company in Woonsocket, RI, where he and Joyce began their family. He was transferred to Waterbury, CT in 1959 and moved to Cheshire, CT where he lived until 1995. During this time, he became treasurer of St Peter’s Church, where both he and Joyce were actively involved, a place where many friends were made and support was found for the many challenges of life.

David left his engineering position in 1962 to take on a new challenge as an owner of Bovano Industries Inc., which he operated as President until 1987. It was his calm personality, engineering skills and perseverance which caused his company to weather many challenges during these years and, to this day, while the company remains operating in Cheshire, his personality remains a foundation of the company. It was his sailing skills that caused him to persevere through these times as best expressed by the phrase “To reach the port of Heaven, we must sail sometimes with the wind, sometimes against it, but we must sail, and not drift, nor lie at anchor.”

David loved his family, his children, grandchildren and great grandchildren and we will miss him greatly, especially those many wonderful moments sitting on his porch, overlooking the pine trees and ocean waters below, talking, laughing and enjoying each other’s company. David has now joined his loving wife in heaven.

David was predeceased by his wife Joyce, his brother Richard and his son Ken. He leaves behind, with loving memories, his son Robert Flood and his wife Marybeth of Friendship, his daughter Marilyn and her husband Richard Rock of Cheshire, his son Jim Flood and his partner Anna Tyra of Southington, his grandchildren Kevin Flood and wife Kelly, Jason Flood and wife Leslie, Christopher Rock and wife Corissa, Kate Rock, Steven Flood and Eric Flood. He also leaves his great grandchildren Ethan, Erin, Megan, Penelope, Piper, Claire, John, Alexandra, Sam, Sawyer and Maxwell. He also leaves his sister Mary Thompson and his brother, John Flood.

Arrangements - A memorial service will be held on Thursday, July 7, 2022, at 5:00 P.M. at Friendship United Methodist Church, Friendship, ME. Calling hours will be held on Tuesday, July 12, 2022, from 5:00 to 7:00 P.M. at the Alderson-Ford Funeral Home of Cheshire, 615 South Main Street. A private graveside service will be held in Saint Peter's Episcopal Church Cemetery, Cheshire. In lieu of flowers please consider a donation to EMS of Waldoboro, 1600 Atlantic Highway, P.O. Box J, Waldoboro, ME 04572.

To order memorial trees or send flowers to the family in memory of David W. Flood, please visit our flower store.