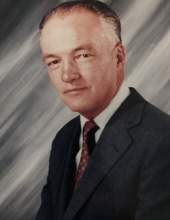 BETHLEHEM- David Bragdon Edwards passed away from complications of Alzheimer’s on February 21, 2020 at the Masonic Hospital in Wallingford. He was born on June 8, 1938 to the late Mildred Follett Edwards and Benjamin Edwards of Naugatuck, Connecticut.

David is survived by his wife of 54 years, Diana Blomquist Edwards. He also leaves two daughters and their husbands, Kristyne and Chad Stiteler of Ohio, and Leslie and Kent Lourenzo of California and four grandchildren, Claudia and Claire Stiteler and Lauren and Tyler Lourenzo. He also leaves a sister, Mildred (Bobbie) Hansen of Massachusetts and a brother, Benjamin Edwards of Prospect and several nieces and nephews. A sister, Dr. Edith Roos of Denver, predeceased him.

After graduating from Naugatuck High School, David served for two years in the United States Marine Corps.
Later, David put himself through college and received a Bachelor’s Degree in Business from UCONN.

After working for NCR in Hartford, and as a systems analyst and Data Processing Manager for Scovill and Century Brass in Watertown and Waterbury, David joined his brother’s business, B.F. Edwards Companies, in Prospect. He worked there for 23 years in various positions, retiring as President and Publisher of their trade magazine, Job Shop Technology.
As a family man, Dave enjoyed many activities with his wife and children, including hiking, swimming, canoeing, fishing, ice skating and cross-country skiing at TONE in New Hampshire, water skiing at Bantam Lake, and, in later years, many of the same activities, along with kayaking, at the family cottage on Thompson Lake in Maine. Retirement provided more time for trips to Ohio and California to visit with his beloved grandchildren. Passionate about water skiing, Dave slalom skied until he was 78. He enjoyed water skiing with his daughters and sons-in-law, and had fun introducing his grandchildren to the sport. He loved flying single engine airplanes and enjoyed several wonderful fly fishing trips to Montana with his brother, Ben, and nephews, Ben and Robert. During the spring and fall, Dave liked to work on his Master Craft and sip many cups of coffee with his buddy, Vinny Rizzo.

Dave was a former member of the Bethlehem Lion’s Club. His favorite charities were Wounded Warriors and the Marine Corps’ Toys for Tots. He also took pleasure in doing a surprise good deed for someone and enjoyed helping people in need.

Calling hours for Mr. Edwards will be held 10 A.M to 12 P.M, Saturday, February 29, 2020 at The Alderson-Ford Funeral Home of Naugatuck, 201 Meadow St, 06770. A funeral service will be held at 12 P.M to conclude calling hours. Burial will follow at the convenience of the family in Grove Cemetery. Donations in David’s name can be made to the Wounded Warrior Project, P.O Box 758516, Topeka, KS, 66675, or to Marine Toys for Tots, The Cooper Center, 18251 Quantico Gateway Dr., Triangle, VA 22172.
To order memorial trees or send flowers to the family in memory of David Bragdon Edwards, please visit our flower store.