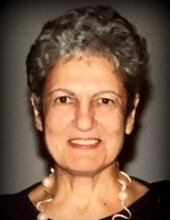 Danielle was born in Paris, France in 1938. During World War II she lived with her cousins in Colmar, Alsace. At the end of the war, she returned to Paris. She was educated at the University of Paris where she earned a License es Lettres. In 1959 she left home to come to live in the United States where she taught French in a number of schools and universities. She earned a Master's degree at Rutgers University.

She taught French language and culture at Southern Connecticut State University from 1966 until 1997. Upon retirement, she began a second career, organizing and leading tour groups to France and other international destinations.

She and her husband had a passion for travel and cultural activities. Together they enjoyed plays, art, and concerts.

The family wishes to thank her kind caregivers at Yale-New Haven Hospital, Grimes Center, and Regency House. A celebration of life will take place upon a later date. The Alderson-Ford Funeral Home of Cheshire, 615 South Main St, 06410, is assisting the family with the arrangements. In lieu of flowers, donations may be sent to Woodbridge Animal Control, 135 Bradley Road, Woodbridge, CT 06525.
To order memorial trees or send flowers to the family in memory of Danielle Santal-Morrill, please visit our flower store.