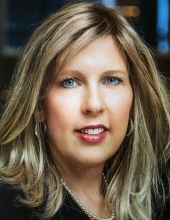 CHESHIRE- Dana Elizabeth Feinauer, 51, passed away, Thursday, June 13, 2019 surrounded by her loving family after a courageous battle with cancer. She was the loving wife of John Frederick Feinauer whom she was married to for 20 years.

Mrs. Feinauer was born May 29, 1968 in Stamford, daughter of the late Domenick and Diana (Duda) Franco.

Dana was a graduate of both Sacred Heart Academy, and Sacred Heart University where she earned her Bachelor’s Degree in Business. She was a Recruiter at Robert Half Account Temps prior to her retirement.

She had a tremendous drive to succeed and would influence others to follow her lead. Her home décor would change with the season, a holiday, or for any reason. Her passion and influence on family and friends, will forever be with us as our hearts slowly mend.
Besides her husband Dana is survived by her two sons Zachary, and Cole Feinauer of Cheshire; her siblings Kristyn and her husband Michael Lefebvre of Fairfield, Dominick Franco of Darien, her twin sister Susan and her husband Ted Lionetti of Stamford; and several nieces, and nephews. She was predeceased by her brother Gary Franco.

Arrangements- Calling hours for Mrs. Feinauer will be held 4 to 8 P.M, Tuesday, June 18, 2019 at The Alderson-Ford Funeral Home of Cheshire, 615 South Main St, 06410. Dana’s funeral will be held 10 A.M, Wednesday, June 19, 2019 at St. Bridget Church, 175 Main St, Cheshire, 06410. Friends are asked to meet directly at church. Burial will take place in Cheshire Hillside Cemetery. Donations in her name can be made to Smilow Cancer Hospital Breast Center, P.O Box 1849, New Haven, CT, 06508. Memo can read in Memory of Dana Feinauer, or be made online, at www.givetoynhh.org, follow prompts for tribute/ memorial donations.
To order memorial trees or send flowers to the family in memory of Dana Elizabeth Feinauer, please visit our flower store.