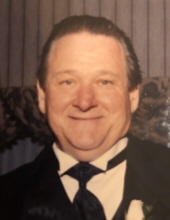 He was born November 29, 1942 in Cheshire, CT to the late Amedee Genest and Viola (Rochford) Genest.

He attended Cheshire High School, and then went on to serve his country during the Vietnam War in Fairbanks, Alaska from 1966-1968. Upon his return from the military, he worked with his father as a carpenter and eventually started his own business, Genest Remodeling, which he owned for many years.

In addition to being proud of his service to his country, Curtis enjoyed fishing and was an avid stamp collector. He also enjoyed baking breads and cakes to share with family and friends. Curtis was a generous and selfless man, offering any penny he had to charities.

Curtis was predeceased by his brother, Donald and his wife, Letitia-Soybel Genest. Curtis is survived by his first wife Lona Marie Hart and their son and daughter-in-law, Scott and Michele Genest of Durham, CT; their daughter and son-in-law Virginia (Ginny) and Geoff Fitzgerald of Burlington, CT; his four grandchildren, Joshua and Ryan Genest of Durham, and Brooke and Lauren Fitzgerald of Burlington, his sister Beverly Genest-Stiles of Florida, and brother Earl Genest of Cheshire, as well as his late wife Letitia’s five grandchildren, Jordan, Tanner, Riley, Gabriella, and Ava. Curtis thought of Letitia’s children, Tristan, Janine, Laura, and their spouses as his own and particularly enjoyed his time with Letitia’s grandson, Jordan.

As a carpenter, his memory will live on through his devotion and dedication to historical restoration and craftsmanship, which can be evidenced through the many historical landmarks throughout the town of Cheshire.

A service for Mr. Genest will be held at 11:00 A.M, Saturday, January 11, 2020 at St. Peter’s Episcopal Church, 59 Main St., Cheshire, 06410. Family and friends are asked to meet directly at the church. There are no calling hours, and burial will be held at the convenience of the family. The Alderson-Ford Funeral Home of Cheshire, 615 South Main St, 06410 is assisting the family with the arrangements. In lieu of flowers, please give to a charity of your choice.
To order memorial trees or send flowers to the family in memory of Curtis A. Genest, please visit our flower store.