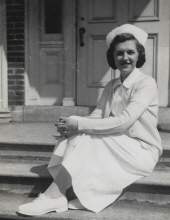 Constance (Connie) Schurk, 89, of Cheshire, formerly of West Haven, passed away Saturday, January 16, 2021, at Middlesex Health in Middletown. She was the beloved wife of Frederick Schurk, Sr. who were wed on Thanksgiving Day in 1955 and celebrated over 62 years of marriage.

Connie was born on December 15, 1931, in New Haven, the daughter of the late Elizabeth (Jennie Hollis) and Stanley Kulenski. She graduated from the St. Raphael’s School of Nursing in 1952 and completed her BS from the University of Bridgeport in 1956. She loved to regale her family with tales of her time at nursing school and of her classmates, many of whom became lifelong friends. They remained a source of comfort and companionship to her and she loved talking shop to anyone in the medical field. She began her career at St. Raphael’s in the emergency department. After starting their family Connie became a full time homemaker.
She later returned to the workforce as a school nurse at various schools in West Haven until her retirement in 1994. She obtained her Master’s Degree from Southern CT State University in 1968. Her favorite pastime was keeping her home pristine and orderly as well as caring for her beloved dog Dakota.

Connie is survived by her eldest son Frederick J. Schurk, Jr. and wife Kelli of Chester, her youngest son Christopher Schurk and wife Alina of Hamden; her youngest daughter Lisa Schurk of Cheshire; her son-in-law Charles Temple of Bordentown NJ; as well as her grandchildren, Holly Schurk, Nicholas Romano and Marisa Romano. She is predeceased by her husband Fred, her daughter Marsha Temple, brother and sister in law Stanley and Joan Kulenski.

A private service for family members will be held at the Alderson-Ford Funeral Home of Cheshire, 615 South Main St. Burial will be held at the convenience of the family and there are no calling hours. Memorial contributions in Connie’s memory may be made to the ASPCA, 424 E. 92nd St., New York, NY 10128-6804.
To order memorial trees or send flowers to the family in memory of Constance "Connie" Schurk, please visit our flower store.