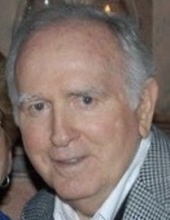 SOUTHINGTON- Chief Dennis “Ned” Edward Clisham Sr., formerly of Naugatuck, peacefully passed away Friday, March 15, 2019 with his family by his side. Ned was born February 4, 1940, the son of the late Paul and Kathryn (Carey) Clisham. He was the loving husband of Johanna (Cignotti) Clisham to whom he was married for 59 years.

Ned, a 1959 graduate of Naugatuck High School, started his career in footwear design at Uniroyal where he exhibited artistic talent in several product lines. To support a growing family, Ned joined the Naugatuck Police Force in 1968 where he held titles of Patrolman, Detective, Lieutenant, and ultimately Chief of Police for nearly 25 years. During his tenure as Chief, Ned oversaw the building of a new Police Department. He received a Red Cross Award for saving a drowning victim and volunteered with his wife as counselors to those battling addiction. He was Chairman of the Youth Activities Committee and volunteered his time as the coach of numerous youth sports teams, including Little League Baseball, Little Pal and St. Francis School Basketball. He was an avid golfer, winning the Municipal Town Championship several times and loved cheering for the Boston Red Sox and New York Giants. His most precious pastime was spending time with his loving grandchildren.

Calling hours for Chief Clisham will be held from 4 to 8 P.M, Monday, March 18, 2019 at The Alderson-Ford Funeral Home in Naugatuck, 201 Meadow St, 06770. The funeral will be held at 10 A.M, Tuesday, March 19, 2019, at St. Francis of Assisi Church, 318 Church St, Naugatuck, CT 06770. Friends are asked to meet directly at church. Burial will follow at St. James Cemetery. Donations in Ned’s name can be made to the Parkinson’s Unity Walk (www.unitywalk.org) or St. Francis of Assisi Church.
To order memorial trees or send flowers to the family in memory of Chief Dennis "Ned" Edward Clisham Sr., please visit our flower store.