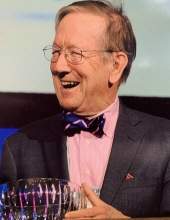 Charles Templeton Kellogg, a respected leader in business, in the community, and in the hearts of all who knew him, died on November 20, 2019.

Chuck was born in Waterbury on November 23, 1931, and lived in the area all his life. A son of Frederic R. and Lucy Templeton Kellogg, grandson of Connecticut governor Charles A. Templeton, he exhibited kindness, integrity, humility in his service to others throughout his life.

After attending Waterbury elementary public schools, he went to Westminster School and graduated from Princeton University in 1953. While there, he participated in ROTC and then served in the U.S. Army in Germany as an officer during the Korean War.

Upon earning his MBA from Columbia University in 1957, Chuck joined Hubbard-Hall as a fifth-generation family member of the chemical distribution company originally founded as Apothecaries Hall in Waterbury in 1849. Under his long tenure, the company expanded and flourished. His leadership roles included President, CEO, Treasurer, and for the last five years, Chuck served as Chairman & CFO un-til his daughter, Molly, became Chairman earlier this year.

Chuck was deeply dedicated to charitable activities and public service. He served on the Governor’s Task Force on Brownfields and on numerous boards of directors, including those of Waterbury Hospital, several regional banks, New Opportunities for Waterbury, and the Waterbury Regional Chamber of Commerce. He chaired the boards of Connecticut Junior Republic, St. Margaret’s-McTernan, and the United Way of Greater Waterbury.

Among his many contributions to Waterbury, he was most proud of his participation in the Waterbury Oversight Board in the 2000s. In this capacity, he helped lead the nearly bankrupt city out of receivership and into years of surplus budgets. A prominent local attorney praised Chuck for his “extraordinary financial and leadership skills,” declaring him “the ultimate ‘reasonable man’” and “one of Waterbury’s greatest civic leaders.”

Chuck won many awards for his business expertise and volunteer service. He was given the Malcolm Baldrige Community award in 2006 for outstanding service. Two of the most meaningful industry awards were Distributor of the Year from the National Association of Chemical Distributors (1996), of which he was a founding member, and NACD’s Lifetime Achievement Award (2015).


Chuck is survived by his wife Martha, and four children, Dana Kellogg of Boston, Molly Kellogg and her husband, John Frantzis, of Newton, MA, Charlie Kellogg of New Haven and Zeke Kellogg and his wife Kina of Westford, MA. His seven grandchildren are Chloe, Daphne, Willa, and Oliver Frantzis, and Eliott, Emmett, and Ginger Kellogg. He is also survived by his sister Judy Kellogg Rowley of Southbury, brother Peter Kellogg of Denver, and many nieces and nephews. Especially close to him were his eldest nephew Andrew Skipp, a former executive of Hubbard-Hall, and his ever-caring sister-in-law, Amy Liston of Portland, Maine.

Chuck was an athlete with special passions for running and golf. He competed in ten marathons over his 25-year career, including five in Boston. He played golf into his 80’s, with a personal best handicap of eight and a local championship. He was a member of Highfield, the Country Club of Waterbury and the Weekapaug Golf Club.

He and his family traveled extensively, including many bike trips throughout the world. Summers were spent at the family house in Rhode Island. They were known for hosting for unconventional parties and celebrations; and their house, colorful in so many ways, was the gathering place for the extended family over the holidays for decades.


For all his wisdom and acumen, Chuck was also charmingly ingenuous. Consider the time his family planned a surprise birthday party for him on a Thanksgiving eve, asking guests to pretend to be stopping by the house spontaneously, as if unaware of the occasion. After an hour or so, with scores of friends and neighbors around him (all of them inexplicably well plied with food and drink), Chuck hit on something. “This is almost like a party!” he remarked, delighted, but still in the dark and never realizing that the party was for him.

A memorial service for Chuck’s life will take place at 11 am on Saturday, December 7 at St. John’s Episcopal Church, Waterbury. In lieu of flowers, those who wish to do so may consider a contribution to the United Way of Greater Waterbury or, in the spirit of this wonderful man, ponder these words from a poem by Robert N. Test: “If by chance you wish to remember me, do it with a kind deed or word to someone who needs you.”
To order memorial trees or send flowers to the family in memory of Charles Templeton Kellogg, please visit our flower store.