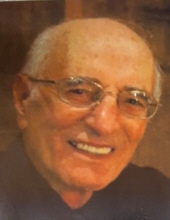 Charles Robert “Chuck” Lorello, age 90, of Cheshire entered into rest after a long illness on November 11, 2021 (Veteran’s Day) at MidState Medical Center in Meriden with his loving family by his side. He was the devoted husband of Marie K. (Pezzullo) Lorello for over 68 years. Charles was born on August 25, 1931 in New Haven, son of the late Salvatore and Maria (Faraci) Lorello.

Chuck served his country with honor and pride during the Korean War with the US Army. He and Marie met in New Haven and began their family in West Haven, before coming to Cheshire 27 years ago. Chuck was quite athletic and was scouted by the Boston Red Sox before being drafted in 1952. His love for sports continued, he cheered for the Boston Red Sox and the Dallas Cowboys, enjoyed golf, accomplishing a hole-in-one at the age of 88, and was also an amazing bowler, having scored a 300. Chuck also supported his grandchildren at their many sporting events. He worked as a carpenter for many years for various companies until his retirement, and was a survivor of the L’Ambiance Plaza accident. Chuck will be remembered as a kind and patient man, always respecting others, a “gentle” man that was loved the moment he was met.

He is the beloved father of Lori Matteis and her husband, John of Prospect; Cindy Card and her husband, Randy of Waterbury; and Salvatore Lorello and his wife, Lisa of Cheshire. Chuck is also survived by his cherished grandchildren, Michael (Lauren) Stevens, Mindy (Joseph) Kerivan, Matthew (Jennifer) Stevens, Dino Matteis and Whitney Lorello; his adored great-grandchildren, Dylan and Chiarina Kerivan and Cole Stevens; and his sister, Josephine Passariello of West Haven. He was predeceased by his siblings, James and Michael Lorello, Mary Criscuolo and Betty Treadwell.

In lieu of flowers, contributions may be made to the Wounded Warrior Project, www.woundedwarriorproject.org Services will be private and at the convenience of his family. The Alderson-Ford Funeral Home of Cheshire is assisting with the arrangements. To leave online condolence for his family, please visit www.fordfh.com
To order memorial trees or send flowers to the family in memory of Charles R. Lorello, please visit our flower store.