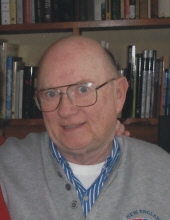 CHESHIRE- Charles Burke Masse, 82 passed away, Wednesday, June 17, 2020 surrounded by his loving family. He was the husband of Judith (Hayes) Masse.

Charles was a veteran proudly serving in the United States Army, where he was a Percussionist in the West Point Band. He was a graduate of Ithaca College, where he earned his degree in Music. Mr. Masse was a Salesman in the Lumber industry prior to his retirement. In his free time he was a member of the Meriden City Band, Meriden Symphony, Cheshire Symphony, Westerly Band, R.O.M.P.S swing band, and the Legion of Mary.

Besides his wife Mr. Masse is survived by his son Thomas Gilmore Masse and his husband James Perlotto, and Patricia Alice and her husband Peter McAlinden; two grandchildren Jake “JMac” McAlinden, and Allison McAlinden.

Services for Charles will be private and held at the convenience of the family. The Alderson-Ford Funeral Home of Cheshire, 615 South Main St, 06410 is assisting the family with the arrangements.
To order memorial trees or send flowers to the family in memory of Charles Burke Masse, please visit our flower store.