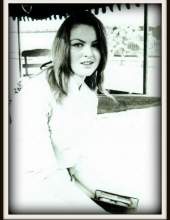 Cheshire - Carolyn Ann Toth is from a Texas family with a long history of service and patriotism going back in this country to 1770 when her maternal Scots-Irish ancestors Thomas and Ann McQuistion settled in North Carolina. When the American War of Independence began Thomas enlisted in the Continental Army and later died in the war in 1783. As the British General Cornwallis approached their home to use as his headquarters, Ann McQuistion and her great nephew, Andrew Jackson, hid the family treasure (an 80 pound keg of gold) under fallen trees in a nearby creek where it remained until after the war. Around 1803 Ann, now a widow of almost twenty years, moved her sons Robert and James and her great nephew Andrew Jackson who had lost his parents in a smallpox epidemic to Shelbyville Tennessee and opened a grist mill. The keg of gold went with them. A young boy, Sam Houston, hung around the grist mill and became a lifelong friend of Robert McQuiston.

Robert McQuiston migrated to Texas with the keg of gold as his share of the family inheritance. Sam Houston went to Texas too where, after the fall of the Alamo, he rallied what was left of the Texas army and went on to win the Battle of San Jacinto in 1836 establishing the Republic of Texas, a new entity which now was both independent and broke. Houston turned to his friend, Andrew Jackson, who had enlisted in the army when the War of 1812 broke out and in 1815 became a hero in the Battle of New Orleans after the British snuck into Lake Pontchartrain from the Gulf of Mexico through Rigolets Pass and surprised the city by attacking from the north. His victory protected U. S. control of the Mississippi River and prevented the British from taking over portions of the 1803 Louisiana Purchase. Jackson leveraged his fame to become President of the United States.

When President Jackson was asked by his friend Sam Houston for money to fund the Texas government, Jackson requested funds from Congress but the request was turned down. Remembering his great aunt’s keg of gold, Jackson asked Houston if he thought Robert McQuiston still had it intact. Sam Houston guessed that his friend still had the keg, so Jackson asked him if any other Texans had any gold. Houston came up with a list of 17 of the wealthiest Texas families including himself. Jackson then invited them to an urgent dinner meeting in Texas to discuss the emergency. At that meeting all 17 families pledged their entire fortunes to the cause of Texas solvency. That gold, of which Carolyn’s McQuiston ancestors provided the largest share, literally saved the Republic of Texas. Robert McQuiston later said he never regretted his gift. Carolyn’s lineage eventually included two Texas governors.
Carolyn’s family history of courage and sacrifice continued into the twentieth century. Her father, Milton Crow, earned two Silver Stars after taking over his unit during the bloody landing at Salerno, Italy, and a bitter campaign up the Rapido River Valley and later into Europe. Her brother, Carl Crow, also earned two Silver Stars as a helicopter gunship pilot in Viet Nam.

Carolyn grew up in Amarillo, Texas but spent most of her school years in Houston where she attended a large high school and actually took one acting class with JoBeth Williams (Kramer vs. Kramer, Poltergeist) and possibly Jaclyn Smith (Charlie’s Angels). She studied to be a model as well during this period but abandoned that career choice in order to enlist in the U. S. Air Force on January 12, 1968.

After attending Intelligence School in Denver, Colorado she was assigned to the 2nd Air Force Reconnaissance Technical Squadron at Barksdale Air Force Base in Bossier City, Louisiana where she met her husband of 52 years, Alan Toth of Cheshire, CT. They were married on October 13, 1969. Carolyn was promoted to Sargent and became a Viet Nam veteran in January 1970 when assigned to the 355th Tactical Fighter Wing at Takhli Royal Thai Air Force Base in northern Thailand. She supplied F-105 pilots there who bombed North Viet Nam with intelligence such as aerial photographs of their targets and strip charts to help them find them.

After their Air Force careers Carolyn and Alan moved back to Baton Rouge, Louisiana where Alan became the State Archaeologist and Carolyn his “crew chief” for a number of excavations which included an Indian temple mound used for burials and possible religious ceremonies for over 1500 years beginning a century or so before the birth of Christ. Other projects involved a number of village excavations, surveys, and even work at a star-shaped brick fort protecting the Rigolets Pass into Lake Pontchartrain. Carolyn had no idea at the time that Fort Pike, which was the highest priority defense project after the War of 1812, had anything to do with Andrew Jackson or even that he was related to one of her ancestors. Nor did she know anything about the McQuiston gold or the role it played in the history of Texas.

While living in Baton Rouge and raising her young sons, Scott and Marc, Carolyn began her service as a Christian doer (not just hearer) of the word. She delivered relief aid with the Meals-on-Wheels organization, and taught children’s Sunday School at a large Methodist Church where she also became an expert at running an amazing Children’s Church. After moving back to her husband’s hometown of Cheshire, CT in 1978 she continued the same work at a Baptist Church but also added teaching for and eventually direction of the Vacation Bible School program and many hours of help planning and running the Missions Program of which her husband was Chairman. She also was involved in a town effort to bring a Vietnamese family to Cheshire and later was the primary contact person when her Baptist church sponsored a family of nine Cambodians.

When sons Scott and Marc finished college and were stolen away by the West Coast, Carolyn dealt with the “empty nest” syndrome by becoming very involved with the international student ministry at Yale University. Ultimately, she and her husband helped to establish a Sunday School program for international students and a church service at Timothy Dwight Chapel on the old Yale campus which attracted about 120 students, mostly from mainland China. Carolyn established a host family program for them too after a graduate student told her that he had been in the United States for five years without ever interacting with any Americans except to make purchases at stores. Carolyn worked tirelessly to find host families to invite students for Sunday dinner, birthday parties, a trip to the beach, or anything else that would help them get to see how Americans actually lived. Carolyn and Alan also ran a Bible study for international students for over a decade plus many events such as a hike up Sleeping Giant Mountain, a Christmas party, a picnic at the beach, or a Thanksgiving dinner with all the trimmings (plus a message of course).

Eventually Carolyn went to college herself, attending classes at Storrs and most of UConn’s satellite campuses. Majoring in General Studies, she finally graduated in 2005 Summa cum Laude with a 4.0 average. Professors in music, nature writing, and Broadway plays gave rave reviews of her work and suggested some of her papers for publication. Her professor of molecular biology, a medical research doctor at the UConn medical center in Farmington, asked her to be her research assistant after graduation because “she asked all semester the questions her colleagues should have been asking.” Carolyn declined, mainly to start a graduate program at UConn in Jewish studies. She never finished that program as her health began a long decline.

Carolyn’s long battle with presumed “Mills Syndrome,” which is a variant of ALS (Lou Gehrig Disease), began over seven years ago and may even date back to her Air Force service in Thailand where Agent Orange was used heavily as it was in Viet Nam and can be associated with the disease. Totally bedridden for the past four years, she endured failure of one organ after another beginning with her right hand then arm, leg, and foot, followed by bladder, colon etc. All the while she suffered constant pain from severe spinal stenosis. Carolyn’s battle is over at last. She fought her illness with the courage and strength that you would expect from a lineage of Texas heroes. Most likely some of them were there to welcome her into glory.

Carolyn is survived by her husband, Alan Toth, her two sons, Scott and Marc Toth, her two grandsons, Sean and Eric Toth, and her brother Carl Crow of Houston, Texas.

Postscript: Carolyn’s story is unique, as is everyone’s life tale, but it is not exceptional. Multiple millions of Americans have similar sagas to tell because Carolyn and her lineage on both sides represent who Americans are and were from the very beginning: people who thrive under the banner of liberty and a justice system which is fair; who care about their families, their neighbors, and each other; who are willing to sacrifice everything on the battlefield to keep that liberty or help others find it too; who are generous to those in need as long as they make the decision to give as Robert McCuiston did when he donated the family gold to save Texas (not the government who may decide to take via taxes but also may waste); who want to worship in their own way the Creator (not the government) who gave them their inalienable rights; and who invent ways to improve our lives and fix things that are wrong. Maybe we all want to be Texans, or rather maybe we all need to be Americans. We do not need history to be rewritten (especially without any factual basis). Instead, we need our American stories to be shouted from the rooftops so that we do not forget who we are! Here is the story of Carolyn Toth, a Texan. Who is next?

Arrangements – A service will be held to celebrate Carolyn’s life on Thursday, June 17, 2021 at 11:00 A.M at Alderson-Ford Funeral home of Cheshire, 615 South Main St. Burial will follow at Cheshire Hillside Cemetery. Friends may visit with her family from 10:00 A.M. until the start of the service.
To order memorial trees or send flowers to the family in memory of Carolyn Ann Toth, please visit our flower store.