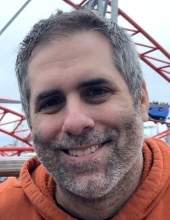 Bryan Levesque, age 46, of Southington, passed away peacefully on June 28, 2022 at Mid-State Medical Center, following a relatively short battle with an aggressive form of prostate cancer.

Bryan is survived by his wife, Kellyn McCormack, and his favorite person in the world, his son, Darin Levesque.

Bryan approached everything he did in life with passion (many people might have affectionately described this as obsession), which led him to succeed at a number of different jobs and hobbies throughout his life, including winning lowrider hydraulic competitions across the country, winning RC car races in Waterbury, having a successful photography business, and earning his degree as a licensed physical therapy assistant.

All of those ventures led to what can be described as Bryan’s biggest entrepreneurial success, Primary Airsoft, a company he founded after inventing a product that changed the way the game of airsoft is played across the world. Bryan will forever remain a beloved pioneer of the global airsoft community.

Bryan had a way of being both positive and snarky at the same time, a distinct personality that will be greatly missed by everyone who knew and loved him. He said a number of times after his diagnosis that he was so thankful for how much he was able to accomplish in his life to that point, which brings comfort to those who miss him dearly.

In addition to his wife and son, Bryan is survived by his son’s mother, Grace Szwaba; his mother, Carolyn Pelletier; his brother, Richard Levesque; his sister, Angela Paradis; and his nieces and nephews, Joey, Grace, Megan, Cody, Evan, Dakota, and Katie. He was predeceased by his father, Roger Levesque.

Bryan’s family wishes to extend a thank you to the amazing doctors, nurses, and other support staff both at Mid-State Medical Center in Meriden and Memorial Sloan Kettering in New York, all of whom treated Bryan like family over the last eight months.

A celebration of Bryan’s life will take place at the community pavilion at the Southington Drive-In on Saturday July 9, 2022 from 11:30 a.m. to 3 p.m.

To order memorial trees or send flowers to the family in memory of Bryan Levesque, please visit our flower store.