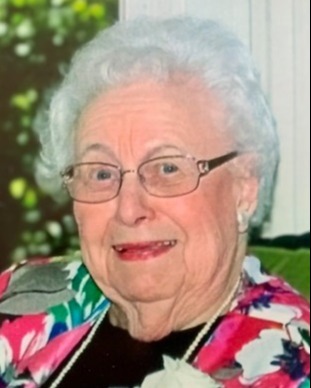 Bonnie was born in 1915 in Champaign, IL. In 1936, she moved to Indianapolis, IN to work with the Farm Security Administration, where she met her future husband, Bill. Following his service in World War II, they married in 1946 and moved to Naugatuck, CT. There she raised her family, assisted Bill in his dental practice, and became an integral part of St. Francis Church and Parents Club, the Culver Heights neighborhood, the Naugy Red-Hatters, and the borough. In capturing the life of a person who has gone from horse and buggy to outer space travel, it can best be said that Bonnie was a person who could be counted on to help where she could and to do the best she could. She had a strong faith, a keen mind until her death, an amazing resiliency, and a sense of humor that earned her the name of Nana to many. She was a fantastic role model for her family, their friends, and the many lives she touched in her life.

In accordance with her wishes, arrangements for a private Catholic Mass and burial are being arranged by Alderson-Ford Funeral Home in Naugatuck. For those who wish to make a donation in her memory, please send donations to the American Legion Post #17, P.O. Box 226, Naugatuck, CT 06770.