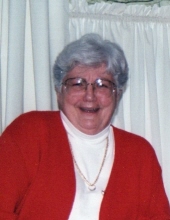 Mrs. Anderson was born December 22, 1932, in New Milford, the daughter of the late Robert and Esther (Moulton) Hartwell. She graduated from Naugatuck High School, Class of 1950 and worked for many years at Ford’s Pharmacy. She was a longtime Naugatuck resident where she was a member of the Congregational Church of Naugatuck.

Mrs. Anderson is survived by her son Robert Anderson and his wife Heather of Naugatuck; her daughters Susan Smith and her husband Jeff of Lincoln, RI; Karen Fennelly of Waterbury; and Janice Chapin and her husband Paul of Hightstown, NJ. She is also survived by her grandchildren: Jason, Caity, Sarah, Matthew, Sean and Daniel. In addition to her husband and her parents, she is predeceased by her brother Robert F. Hartwell.

Arrangements – A graveside service will be held at a later date in Grove Cemetery, Naugatuck. There are no calling hours. Memorial contributions may be made to the Endowment Fund of the Congregational Church of Naugatuck, 9 Division St., Naugatuck, CT 06770.
To order memorial trees or send flowers to the family in memory of Betty Anderson, please visit our flower store.