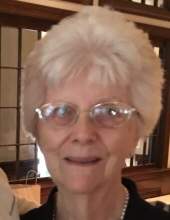 Barbara (Buckland) Busk passed away with dignity and grace, August 3, 2020, at Yale New Haven Hospital. Barbara was born on April 25, 1931 in Waterbury, CT.

She was raised in Cheshire with a love of farming, horses, and an unwavering work ethic. She attended the University of Connecticut and spent the early part of her career at Yale-New Haven Hospital and later with Cheshire Public Schools. She was passionate about genealogy and American History. Barbara was an active member of the Daughters of The American Revolution. She also loved to knit and leaves a trail of Christmas stockings for all who knew her.

Barbara raised her family in Cheshire and resided in Branford in her later years. She was a quiet, strong woman who valued hard work and her independence. Her heart and door were open to all. Barbara always took care of others and taught us the meaning of family. She loved nothing more than being a grandmother.

Barbara was preceded in death by her loving husband of 56 years, Albert S. Busk, her father Wilbur N. Buckland, her beloved mother Lida (Vance) Buckland, and her brother Richard A. Buckland.

We would like to extend our heartfelt gratitude to the dedicated nurses and staff of The Supportive Care Unit and VITAS Hospice at Yale-New Haven Hospital, your kindness and compassion will always be remembered.

Funeral Services will be private. A memorial service in Barbara’s honor will be held at a later date. Memorial contributions may be made in Barbara’s name to the Daughters of The American Revolution Scholarship Fund by visiting, https://www.dar.org/giving/support-program-your-choice The Alderson-Ford Funeral Home of Cheshire has been entrusted with her care. To leave online condolences for Barbara’s family, please visit www.fordfh.com
To order memorial trees or send flowers to the family in memory of Barbara (Buckland) Busk, please visit our flower store.