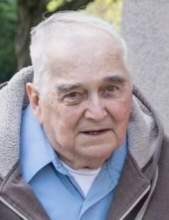 Naugatuck - Arthur Gerrity, 80, passed away on Saturday, February 6, 2021 at Waterbury Hospital. He was the husband of Helen (Dunham) Gerrity.

Mr. Gerrity was born July 30, 1940, in Flushing, NY, the son of the late William and Anna (Geiser) Gerrity. He was a long time Naugatuck resident where he worked as a tool setter. He proudly served his country in the U.S. Army.

Visitation for Mr. Gerrity will be held on Thursday, February 11, 2021, from 5:00 to 6:30pm at the Alderson-Ford Funeral Home of Naugatuck, 201 Meadow St. A funeral service will conclude visitation at 6:30pm. The Naugatuck Veteran’s Council will render honors at 6pm. A graveside service with military honors will be held on Friday at 10 am at St. James Cemetery.
To order memorial trees or send flowers to the family in memory of Arthur Gerrity, please visit our flower store.