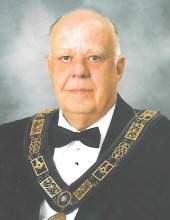 PLYMOUTH- Arthur H. Carlstrom, 83, of Plymouth passed away Friday, May 8 at Waterbury Hospital. Arthur was born January 15, 1937 in Waterbury, the son of the late Henning and Lena (Larson) Carlstrom. He was raised and educated in Waterbury and after graduating from Crosby High School in 1954, he served his country in the United States Army from 1959 to 1961. He was the loving husband of the late Marilyn (Hubbard) Carlstrom.

Before his retirement, Art worked as a long time office manager at the Hallden Machine Company in Thomaston and later as a buyer for Midland-Ross Janitrol Aero Division of Plymouth which became Honeywell International.

Art was a lifelong Mason; he first joined Doric Chapter, Order of DeMolay in Waterbury, where he served as Master Councilor and went on to achieve every award that the Order of DeMolay bestows. He then joined Euclid Lodge No. 135 in Waterbury where he became the chaplain. He went through the chairs, serving as Master in 1971. After serving 15 years as treasurer, he became Master again in 1986 until Euclid Lodge closed in 1988. Art then affiliated with Union Lodge No. 96 in Thomaston and served as Worshipful Master. Art’s next move was to St. Paul’s Lodge No. 11 in Litchfield. He served the Grand Lodge of Connecticut as the 162nd Most Worshipful Grand Master from 2009 to 2010.

Art was also a past Eminent Commander of Clark Commandery No. 7, a member of Connecticut York Rite College No. 17 and Connecticut Priory No. 28, Knights of York Cross of Honor. Art was also a member of the Scottish Rite in the Valley of Waterbury, and Lafayette Consistory. He received the Arthur M. Brown, 33rd degree, Meritorious Service Award from the Connecticut Grand Council of Deliberation, the governing Scottish Rite body of the state. He was coronated a 33rd degree Scottish Rite Mason by the Northern Masonic Jurisdiction, which is the highest honor in Masonry. Art was also in the service of the Order of Eastern Star, Olivet Chapter No. 29 and Frederica Chapter No. 110 and a member of the Sphinx Shrine. For his outstanding contribution to freemasonry in Connecticut and his continuing service to the fraternity, he was awarded the Pierpont Edwards Medal in 1989.

A memorial service will be announced at a later date. The Alderson-Ford Funeral Home of Waterbury, 496 Chase Ave, 06704, is assisting the family with the arrangements. Memorial contributions can be made to Connecticut Freemason Foundation, Permanent Endowment Fund, 69 Masonic Avenue, Wallingford, CT 06492 or Grand Chapter of Connecticut, Order of the Eastern Star (designated to the Office Fund), P.O. Box 143, Plymouth, CT 06782.
To order memorial trees or send flowers to the family in memory of Arthur Carlstrom, please visit our flower store.